Hive Colab is the name of the office I worked at during the whole two months in Kampala. It’s a tech collaboration hub founded by one of my fellowship advisors, TMS or Teddy Ruge. As seen in the photo, it’s set up as a large open space with islets of desks spread throughout. It’s such a great space to work in because you never know who is going to drop in from which country, who you’re going to work with, and what projects you might discover. My colleagues range from coding nerds to serial entrepreneurs to mobile app gurus. A few weeks in, I found out that one of the creators of Winsenga, an award winning ultrasound app, was sitting at the desk just across me. The team, originally from Makerere University, had created this app to help reduce maternal mortality rates and most recently was awarded $50,000 by Microsoft. In the corner desks by the window sits my friend Anne Giuthu. She started a business in her early 20s, had it acquired by another company, is CEO of her second marketing company now, is deputy director of the marketing department at a university, and is a mother of one. Oh and she’s also only 25 years old.

Being at this space is how I easily got connected to my research partner, Joseph Wanda, pictured below. He doesn’t like having his photo taken so this is all you’re going to get.

He is serial researcher, having conducted all kinds of research for companies and universities, including Hive Colab. Once he came on board my research became a lot more concrete. I could finally determine what specific areas to sample around Uganda since Joseph knew the geography a lot better than me. Over the course of one week, we established a tentative schedule for 3 weeks of field research ranging geographically from central Uganda (Kampala) to eastern Uganda (Jinja and Mbale*). Kampala was a good starting point because we were already there and familiar with the place. We also knew of which slums to visit and could navigate ourselves around them because Joseph had done prior research in them. Jinja and Mbale were more foreign places to both of us but we knew we had to get out of central Uganda. One of the big reasons was to see if areas that were less industrialized with less access to media would have different perceptions of how they were represented in western media, if at all. Jinja and Mbale were less industrialized cities, both with large slums and many local NGOs present.

The blue poster seen above, and pictured below as well, illustrates the brainstorming process of my field research objectives. They were: 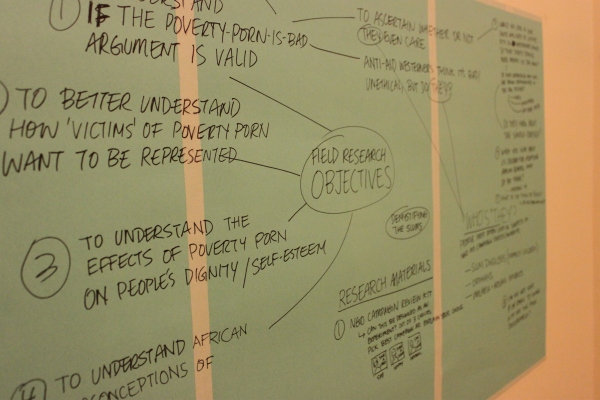 I am currently back in New York, still scrambling to write catch-up posts on this blog and keep you guys up to date. It’s been difficult coming back to this bustling city and trying to process the past two months of adventures. Bear with me as I try to present the meat of my project in the next few weeks before school starts.

The next few posts will tell the stories from each of our sites: Kampala, Jinja, and Mbale.