Ornamentation and Life in the City

The most important lesson I have learned during my grant period is that it is my research moves along much better if there is a way for me to align my own interests in culture and art with the greater interests of the group.

No one is interesting in sitting around an answering a researcher’s questions. That was the first lesson I learned.

I am not interested in simply buying crafts and then disappearing, as most visitors have done before me.

How do we reconcile these conflicting desires? I want to learn about craft and culture, and las Madres want access to a broader market for their art and to learn new textile techniques.

So far, we have come up with two solutions:

The first was the needle felting workshops, where I provided tools and enough materials to teach and begin experimenting and developing new products on which las Madres could express their traditional patterns. Essentially my position changed from “researcher” to simply “fellow artisan”, and this was a lot more comfortable for everyone, myself included. The workshops are a continuing event, and each time we set up the materials and work on projects together, joined by whichever madres are free at the time.

The second is the application to the market which takes place every July in New Mexico. I don’t know what our chances are of getting accepted, or getting financial assistance, which would be crucial since we aren’t supported by an organization… But if I learned anything at art school, it was how to apply for scholarships! The application in an interesting activity for us to do together because not only is it a chance to gain a new venue for Shipibo art, but we must answer extensive questions about the culture and history; the same kinds of questions that I would want to ask for my research.

So, we have started taking pictures of different forms of traditional art each time I go to Cantagallo, and having discussions with different artisans about their work.

Yesterday I met with Diana Ancón Rodriguez, a member of Las Madres de Ashé, and her husband Fernando, who live in the upper level of Cantagallo and specialize in making beaded bracelets and pecheras, a necklace/chest ornament that are a traditional part of Shipibo adornment. In Shipibo culture, beauty is synonymous with adornment, and therefore coronas (headresses), pecheras, bracelets, earrings, pampanillas (skirts), cushmas (tunics), and historically body paintings with huito oil, are all an important part of being a beautiful Shipibo man or woman.

In the “Testimony of a Shipibo Woman”, Koshi Shinanya Ainbo describes the Shipibo aesthetic of feminine beauty:

The Shipibo woman is not beautiful just like that. She must have long hair, she must be slim, and then she will be beautiful with all of her adorments. We put seeds around the edges of our skirts so that it makes noise with all of our movements, we wear anklets and bracelets. That is how a beautiful woman is. I don’t believe that just any woman can be beautiful. If we are just sitting without all our adornments then we are not beautiful, and no one tells us we are good looking. For that reason, to be a beautiful women, we must put on our adornments. We must wear our beaded belts, our decorated skirts, our headdresses, earrings, lip ornaments, and paint decorations on our faces, foreheads, feet and legs with huito. This is how a woman is beautiful. If we are not adorned, there is nothing to make us look beautiful.

Life in the city of Lima is very different from the Shipibo homeland on the Ucayali river however. Although the artisans of Cantagallo still have their traditional clothing and adornments, it is difficult to go out in the bustling streets of the city dressed as a beautiful Shipibo. At best, it’s a bit awkward, and at worst, everyone I talked to mentioned incidents of discrimination. Cesar Maynas Bardeles, a practitioner of traditional medicine in Cantagallo, talked to me about how people of the community have to live dual lives, maintaining and protecting their heritage, language and customs, as well as conforming to modern mestizo ways of dress and city life.

Fidelia Franco Ahuanari, Cesar’s wife and a member of Las Madres de Ashé, works on her embroidery in her house.

Cesar works on two paintings commissioned by a restaurant.

Cesar works on his computer 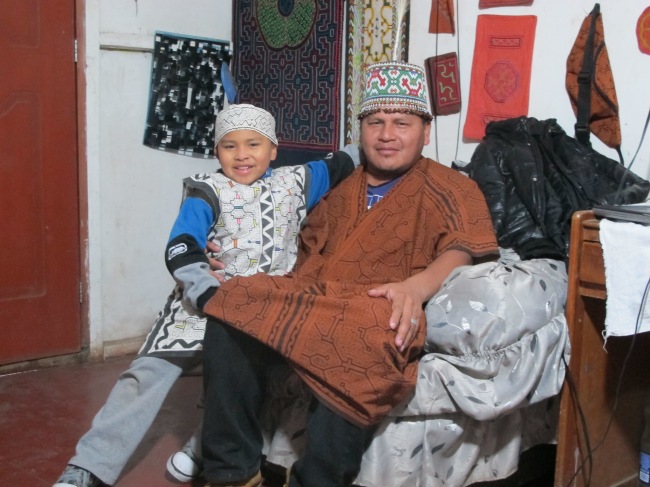 Cesar and his son Alesandro put on their traditional cushmas and coronas for a picture. 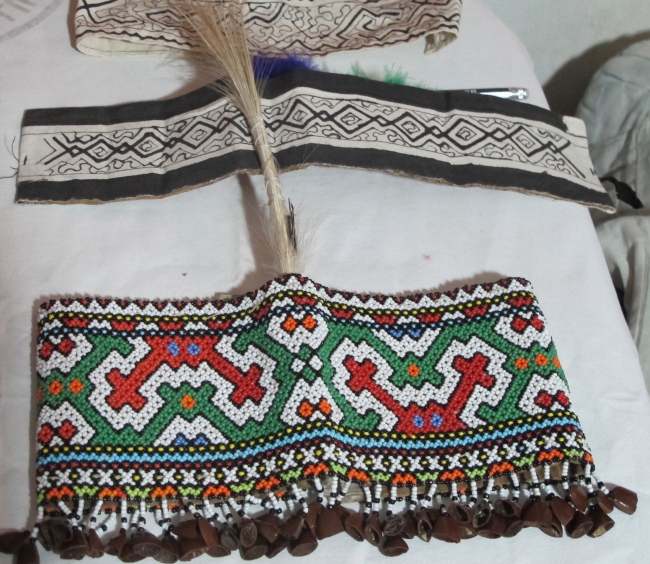 A traditional beaded corona with seed pod fringe, and hair/feathers from a garza, some kind of animal/bird from the jungle…

We played dress up to get pictures of the pecheras in their traditional use, and both Diana and Luz Franco Ahuanari were practically rolling on the ground laughing as they got all their traditional ornamentation in place. They managed to put on serious expressions for the camera however, but broke out in giggles every few seconds. 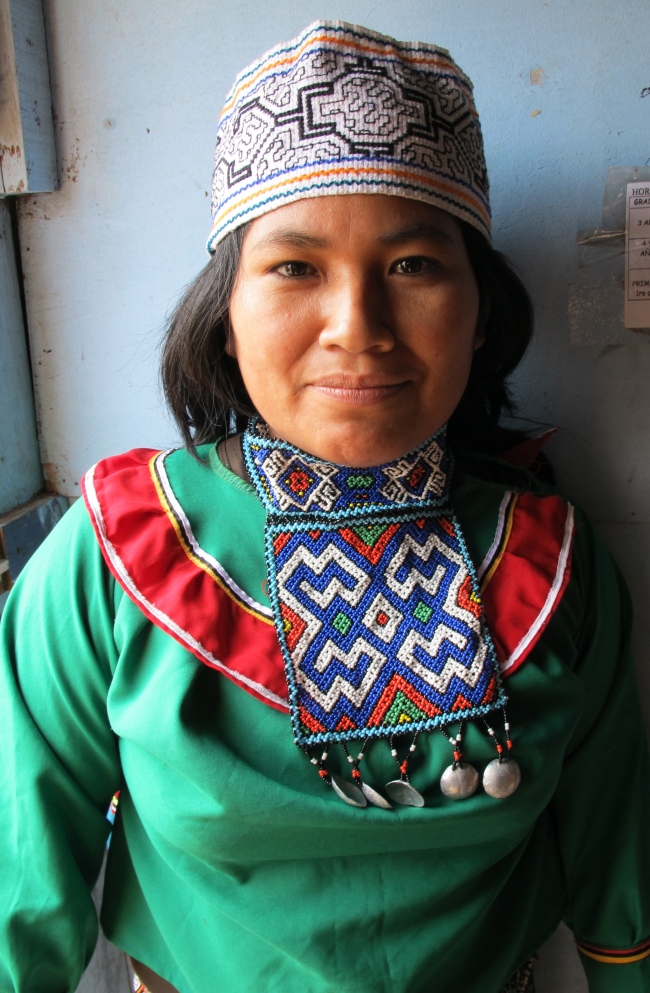 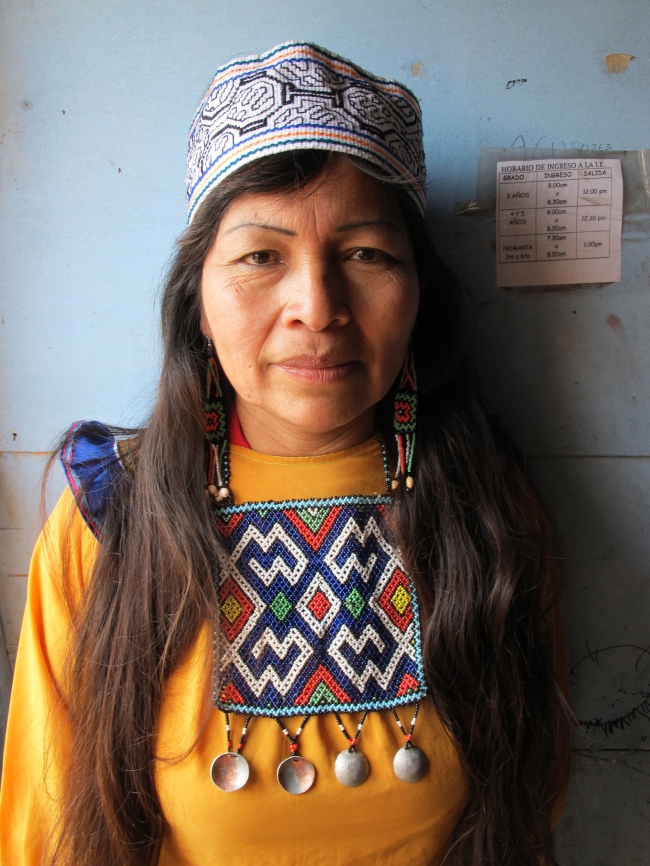 We photographed an inventory of the jewelry they were working on. Because it’s hard to sell these relatively expensive, time consuming works on the street, they only make them on commission. Often their commissions come from teachers who need traditional costumes for dance performances, or family members who work as shamans in Iquitos and sell pecheras to tourists.

Different pechera patterns have different metaphorical meanings, such as “the union of the family”, but in general the kené patterns represent all elements of the Shipibo world: rivers, forests, animals, life, death, and the union and balance between all these elements. Different parts of the patterns have names and significance: the zig-zags around the edge represent piranha teeth, and other parts represent a turtle head, trees, and rivers. 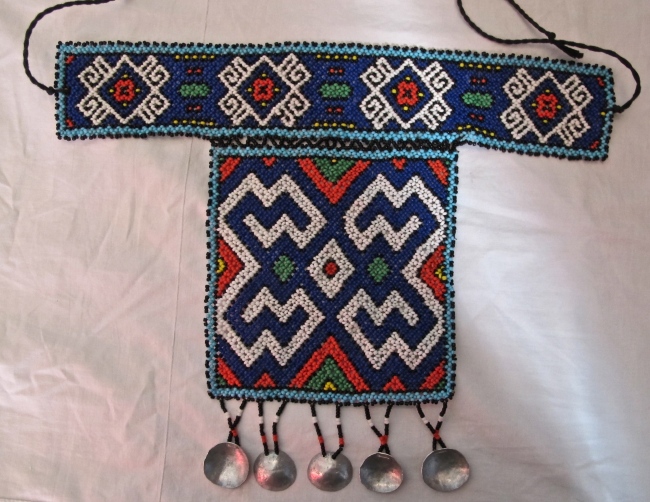 Fernando shows how the fringe decorations are cut out of an aluminum pot lid and hammered into a convex shape.

Fernando, Diana and Luz show how the pecheras are put together from beads. (Diana and Luz are both almost collapsed with laughter because Luz is posing as if she’s making one)

Photographs from the ‘HERS’ exhibition

As mentioned in an earlier post, Nupur and I were invited to participate in an exhibition titled ‘HERS.’ The exhibition took place on 24 and 25 August in Delhi. The exhibition was curated to examine the complexities of gender, masculinity and femininity in India – a perfect fit for the two projects we developed while in Delhi.

the exhibition received some media coverage in the Delhi press. You can read about it here: http://www.dailypioneer.com/vivacity/women-and-their-city.html

Below are moments captured during the exhibition.

Guests at the HERS exhibition 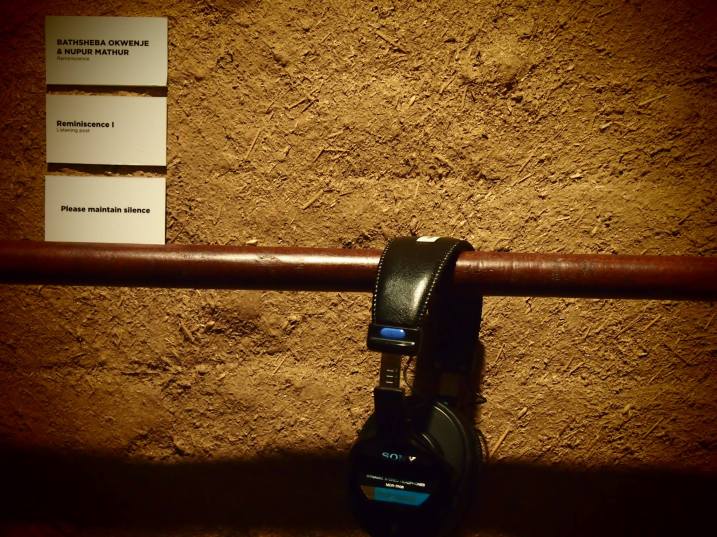 A listening post for our audio piece titled Reminiscence I 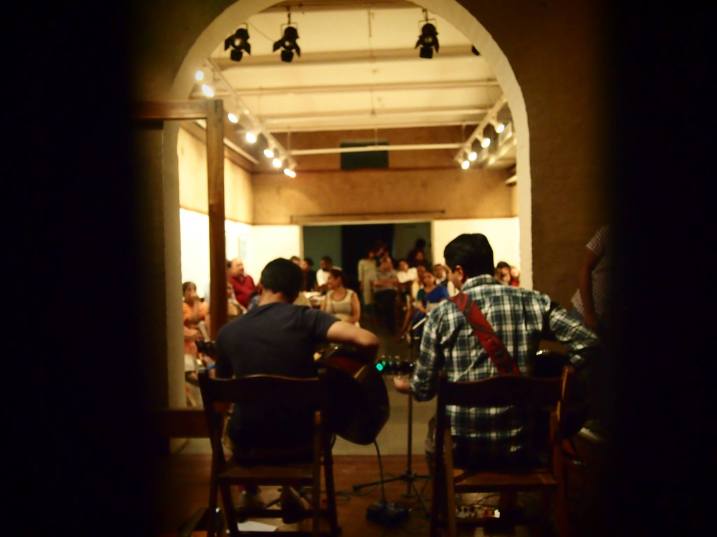 “Why could no one come to this meeting?”

I wondered out loud to Señora Luz during my second “official” meeting with Las Madres de Ashé. Ostensibly the meeting had been their idea to get everyone together and have a further discussion (about whether or not they wanted to deal with this gringa researcher), but no one had showed up..

“You know, las mamitas are difficult, if it’s cold, no one wants to go out even if a meeting has been planned… But, on the other hand, if there’s something interesting going on, everyone will just show up of their own accord, you don’t even have to tell them to come!”

Ok, I got the hint. What’s the plan of action to get this research moving? Make something interesting happen! And fast! Luckily, I already had a plan in the works due to some quick brainstorming after my first meeting with las Madres. They seemed very interested in learning new techniques, and I managed to come up with the idea of a needle-felting workshop because it is one of the more portable textile techniques (i.e. no loom or knitting machine required). The more I thought about it, the better it seemed: needle-felting involves adding fiber to a base cloth, in the same way that the embroidery needle also adds material, yet it has a freedom of movement that can be painterly or expressionistic. In that way, needle felting seemed like a technique that could be a middle ground between the techniques already used by Shipibo artisans: painting and embroidery. In addition to that, the women could use the technique to put their traditional designs on a wide range of fabric types to make new products for Lima’s climate. I proposed the idea and it was met with great excitement. Even better, I managed to find all the necessary materials in the nearby wholesale market, although needle felting is still relatively unknown in Peru: perfect timing for Shipibo needle felting to land! (My research for this involved going to a hobby fair at the national museum last Saturday, wandering around, and making tacky crafts with a couple hundred middle-aged ladies…there weren’t any needle felting workshops..)

So I arrived in Cantagallo Monday afternoon, as fully prepared as I could possibly be with a brand new tool box full of needle-felting tools, brushes, replacement needles, sheep and alpaca wool, different kinds of fabric, and a list of the prices of everything and the business cards of each store where materials could be found.

We set up in the meeting room, and sure enough, people wandered by, poked their heads in, and joined the workshop. Certainly not because we had put up posters a few days before! I never pictured myself as a teacher, not to mention leading a workshop, but that’s the best thing about artists: You don’t have to explain anything to them, just make a lot of materials available, and they are already on their way! In fact, I barely needed to demonstrate how the needle-felting tool was held and already these talented artisans were manipulating the new materials with ease, tracing out their patterns, and needle felting like pros. 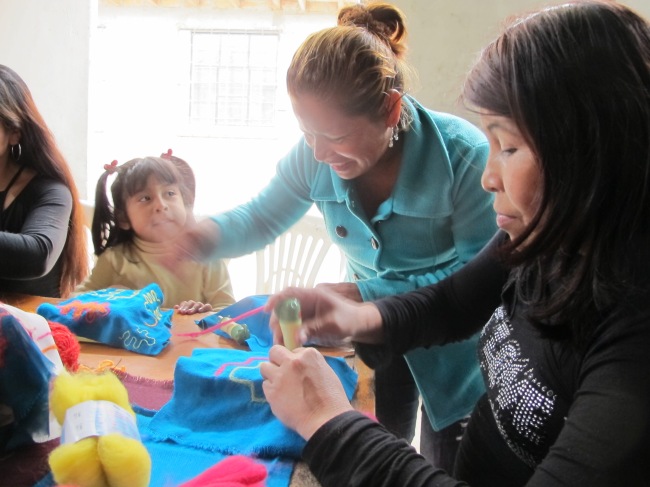 Women wandered in and out of the workshop, on their way to or from buying fish, sometimes rushing back to their houses to grab a different material to experiment with. A little girl named Belén came in with her mother, and was asked by all to sing us songs while we worked. Very quickly she decided she wanted to needle felt too, and although the tool is filled with very sharp needles, it seemed like a safe enough toy for a five year old, right? 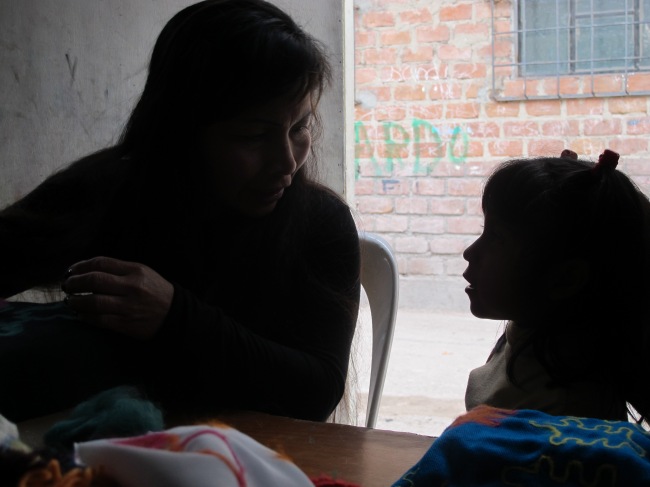 At the end of the workshop, Belén asked me what day I would be coming back, I answered that I didn’t know, and it could be which ever day. She said “I want you to come every day!”, which made me feel like the workshop was a complete success. In fact, everyone agreed that we should meet at the same time the very next day to continue the workshop. 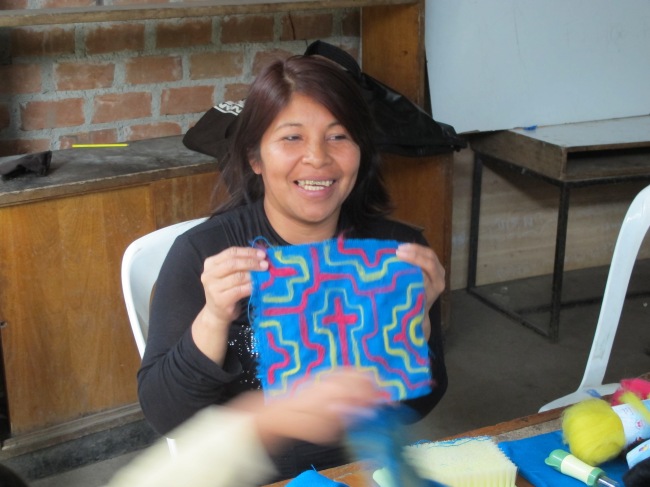 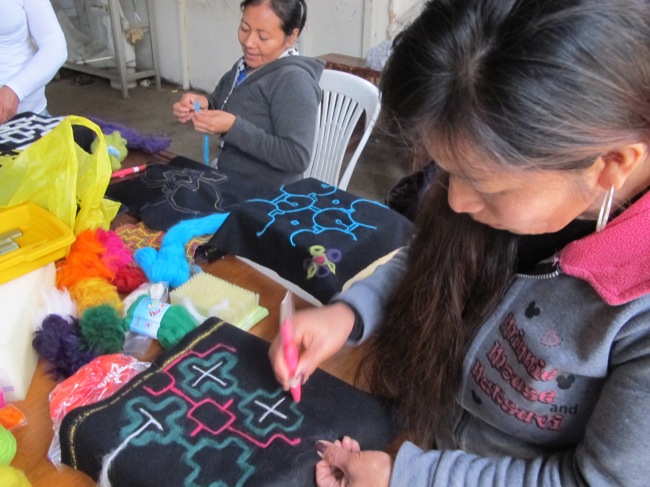 Señora Luz works on her pattern, with Nemia in the background.

When heading to the workshop the next day, I thought to grab a handful of printer paper and a box of crayons just before leaving the house. So, when a whole group of roaming, curious children showed up at the workshop in the afternoon, nine year olds carrying their baby siblings, I was prepared. The felting workshop turned into a card making workshop as they all made drawings and letters for their mothers, sharing well, and yelling to each other “who has the green?” “give me the brown!” “hey! the baby dropped the blue on the floor!”. They would show me what they were working on periodically, pointing out who had copied their drawing of mountains and houses. Most cards featured big red hearts and rainbow lettering “te amo mamita“. Once they had used up all the paper, they picked up the crayons, picked up their siblings, and trooped off in search of the next activity.