Due to the political nature of this post, I will not be naming any of the people quoted or described.

Through our work with Fundacion Amistad we were able to meet one of Havana’s prominent professors of architecture and urban design. He was interested in our perspectives as young artists and Cuban Americans and invited us to attend one of his lectures for an educational international travel program. We learned about Havana’s history from its official designation as Cuba’s capital, to the iconography of its coat of arms and its vast architectural influences. We even learned the Havana has its very own Chinatown and that its capitol building is twelve feet taller than its inspirational counterpart, the US capitol building.

Although the lecture was very informative, when it addressed more political topics, it was difficult to set aside our own opinions and dismiss our feelings of unease. Nick and I were both raised in the presence of highly critical opinions of Cuba’s government and its sociopolitical situation. My skepticism forced me to confront my bias. We considered the possibility that our parent’s and grandparents fears, although once valid, may no longer accurately describe the experience of the average Cuban. We also considered the possibility that the professor’s statements did not necessarily reflect his own opinions, but because he was in a  public setting, he may have felt the need to express a certain stance to avoid risking his career. We just couldn’t shake the feeling that some of this information was deceptive, especially when it was in complete conflict with the sentiments of the residents we met and our own families.

The professor stated that many of the ideas foreigners have about Cuba are false and inaccurate; “cuentos de hadas” (fairy tales).  He claimed that anyone that believes Cuba’s youth is desperate to leave its country, is greatly  mistaken. He said that the only reasons the Cuban people want to leave their country are economic and financial ones. However, it is difficult to deny that these “economic reasons” are directly related to Cuba’s oppressive political system. In fact, we met one Varadero resident who told us that “economic reasons” often serve as an acceptable explanation for wanting to leave. He  himself used that very same excuse when he was being questioned by Cuban authorities after trying to escape.

According to the professor, Cuba proportionately has the third largest elderly population as a result of a shrinking population, low fertility rate, and the effects of emigration. He said the Cuban government often encourages young Cuban adults to have children. Although we did meet some young Cubans that are looking to raise families, we also met quite a few that said they just wouldn’t be able to afford it. The professor proceeded to justify his claim about Cuba’s fleeing youth by pointing to the significantly larger number of Mexicans  fleeing their country. We found this to be a highly misleading comparison because Cuba does not share a border with the US let alone any other country, making it significantly more challenging and dangerous to emigrate. I remembered a cook in Vedado that told me if a cruise ship were to invite any Cubans wanting to leave, the weight of the Cuban people would cause it to sink. 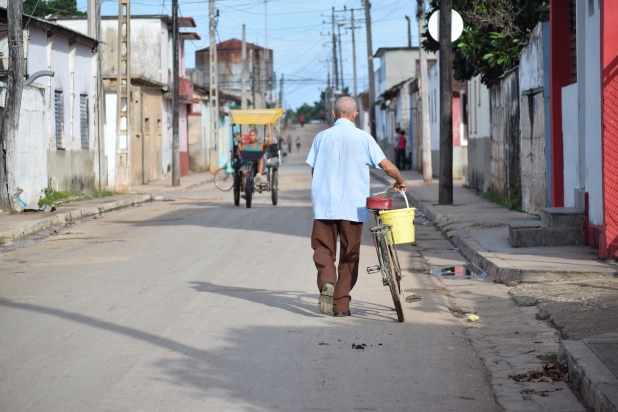 The professor explained that the Cuban people have many things the American people do not, like free education, medicine, and food rations. I couldn’t help but think about the number of Cubans driven to the ocean for whatever reasons; willing to risk their lives and even the lives of their infants, in order to leave Cuba. One woman told us that Cuba’s free education and medicine were of high quality, while another said that those who defend Cuba’s education and healthcare, don’t know what education and healthcare are like elsewhere in the world. She told us about an experience she had in a Havana emergency room and how she was so desperate to be operated on, she had to bribe her physician to take her in before the other patients.

Nick’s cousin and his friends explained to us that in order for a Cuban to even qualify for a visa and leave the country, they must undergo a rigorous and costly process of paperwork and interviews. Their leave can be denied at any point in the process. One of his relatives said some friends of his had illegally fled Cuba on boats they constructed themselves. He said he didn’t want to go like that, he wanted to do it the right way. He said he wants to be able to say goodbye without the fear of never seeing his family again. He wants to take his time preparing his belongings and fall asleep on the plane ride to Miami.

One woman invited us over to her home in order to discuss some important sites to research for our project with Fundacion Amistad. What began as a straightforward conversation about Havana’s public parks and museums, became a highly political and personal one. She works as a cultural promoter and her husband is an artist and jeweler. She is also her husband’s unofficial manager, often working to have his pieces exhibited in galleries and sold to patrons. Her boys are classically trained ballet dancers and triplets. We helped her hang unitards and uniforms on the lines in her patio while she told us things about Cuban life we would never have learned from a travel guide. 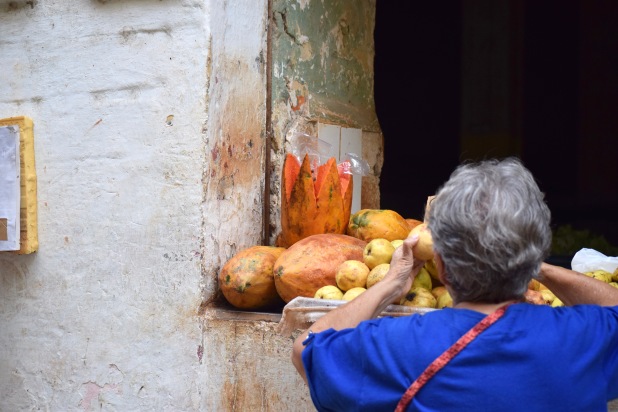 She told us about something called la pyramide social invertida (the inverted social pyramid). This explains why many Cuban people who have earned relatively valuable degrees in medicine or law, earn less money than taxi drivers and servers working in the private sector. Sometimes surgeons are part time taxi drivers and professors are also manicurists, fisherman, or street vendors. She said, “El Cubano vive inventado y lucheando.” The Cuban survives by way of invention. They live lucheando which means fighting, struggling, hustling. She explained to us that even if one is a successful entrepreneur, and one generates a significant amount of capital in comparison to his/her competitors, it is often unlikely they benefit from their efforts financially. We met members of the younger generation that expressed a lack of motivation to work hard because their is an understanding that they will receive the same pay whether they put effort into their work or not. There are rarely benefits for those who work hard nor consequences for those who don’t. Ideally, under Cuba’s political system, everyone should earn the same benefits in order to ensure the absence of social classes and capitalism. 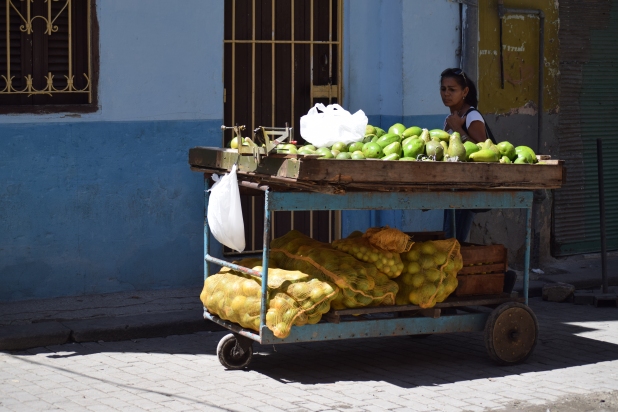 She told us that tourism is Cuba’s primary source of economic gain and elaborated on the impact it has had on the Cuban people. She has witnessed Cubans resort to selling themselves by creating a sort of caricature or embellishment of the Cuban people. Sometimes they offer themselves up for photos or as unofficial tour guides and sometimes the caricature comes about in order to present the illusion that everything in Cuba is as it should be.

She held one of three ripe mangos as she complained about how expensive they were. She said Cuba’s agriculture suffers greatly because of its government. People can earn the same level of pay as office workers as they can as farmers, and so they choose to work in more practical, comfortable settings. She slowly peeled the mango skins revealing their shiny, orange bodies and  began to dice them for tomorrow’s school lunch. She explained that at times, the Cuban mother and father struggle with teaching their children good morals; when to be honest and when to be cautious. It was once illegal to own a home computer and she would tell her boys to keep theirs a secret. She confessed her guilt for encouraging her boys to lie but she knew that it could cost them their education at the ballet academy.

With every story, Nick and I had more questions for her. In reference to everyday life in Cuba, she offered us some advice, “No le busques logica” which means, don’t try to find its logic. She explained that we would encounter conventions and protocol that would have no practical or logical reasoning. She said she feels like everything else in the world is happening at the speed of light but Cuba drags its feet like a tortoise. By the time something is legalized, it has already existed illegally for some time, hidden from the government.  At which point it has likely evolved into something entirely different for the rest of the world.