It’s hard to believe that Kelsey and I got started on this election track the winter of 2012, after we noticed that there was a lack of student voter resources on campus and overall election awareness. We created RISD Votes to help aid students in casting their ballot for the 2012 General Election, while advocating for the intersection of design and government. We were lucky to have Marcia Lausen come speak at RISD about her work in election design, she co-founded AIGA’s Design for Democracy and came out with a book about her experience, “Design for Democracy: Ballot + Election Design.” She and her cohorts at Design for Democracy have been pivotal mentors to us and we hope to continue down the path they paved for future designers.

This past weekend I re-visited her book, accompanied by a cup of Joe of course. Having spent some time away from her book (and after our research experience this summer), I found myself connecting to different things in her methodologies and research. 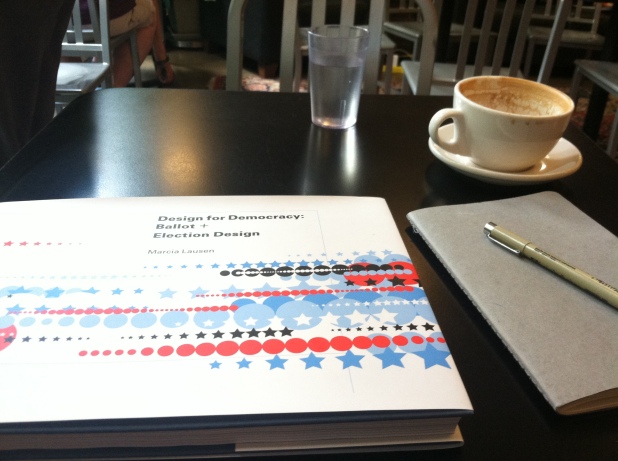 One of the things I connected most to was the forward by Richard Grefe, Executive Director of AIGA:

A government creates trust almost exclusively through communication—using words and images to convey meanings. Most of the communication between a government and its citizens consists of asking for and providing information. These interactions can be positive and engaging experiences, or they can be difficult, frustrating, disengaging ones. The difference is often a matter of communication design.

Graphic design professionals rarely cross paths with election officials. Many election officials are unaware of the existence of our profession, let alone the value of our expertise. Designers often prefer to work in a world where clients come to us, understanding what we do and bringing well-organized projects with reasonable budgets and reasonable schedules—qualities that are not always present in the production of elections.

The complex workings of election administration are burdened with inherited  often antiquated processes and systems of production that make change difficult, if not unwelcome. Budgets are small and time pressures severe. Most ballot design, if it can be called that, happens where election officials, lawyers, typesetters, and printers interact in mad rush to “get it done on time.”

A big shout out to Marcia and everyone else who has started to change how elections are understood and run. Kelsey and I are trying to do our little part in hopes that incrementally, change will occur.

Kelsey’s computer is a wounded solider this week, so she is going to do her research on one of the computers at the RISD library. She is not a happy camper.