After an intense, roller coaster of 12 weeks in Delhi, I’m finally back in the US.
Just in time for this year’s A Better World x Design conference being hosted by RISD and Brown University, whose theme this year coincidently happens to be “Way-finding”. I was honored to be invited as one of the presenters and talk about to my incredible experience in Zamrudpur. The conference was also a great platform to interact with some truly amazing people and organizations about their works across issue, scales and locations. It is really interesting to see how that one word can have so many meanings and connotations and the countless ideas that stem from it. 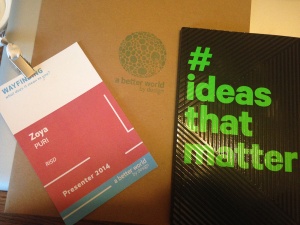 In the coming months, I hope to share this work at some other platforms around Providence like DESINE-Lab’s Student lecture series, Brown & RISD’s collaborative Design+Health Seminar and RISD Landscape Department’s Spring lecture series. It will be interesting to discuss the project and the idea with fellow design community and receive valuable feedback.

Looking back, 2 months seems like a very short time to initiate a big change in the lifestyle and mindsets of people. But while short-term deliverables were set during the project, their impact was palpable soon enough and I was able to see changes myself. ‘Delhi Diary’, a local lifestyle magazine became aware of the changing face of Zamrudpur and published an article on our project. I’m still well in touch with Adhyayan and the children and keep getting updates from them. Its heartening to see that the project did not end with my leaving, they’re moving to planting winter vegetables in the beds, starting more art projects and the amazing group of girls from the neighboring Lady Sri Ram college who started off by volunteering to help with our murals around the village have started other programs with the children. 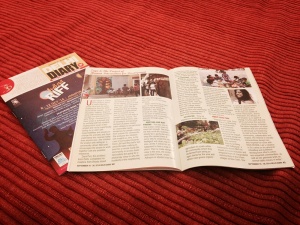 Leaving Delhi is always a bittersweet parting for me, made exceptionally hard this time. I received the sweetest goodbyes from all the children and parents and I realized just how deeply I’d been accepted into the community and their lives. If no one else, my own perceptions of such neighborhoods will never be the same.

Back in the US, I’m currently in the process of using the map created by the children to build a proper document to send to Amit in Zamrudpur. This will be a basis to discuss the more serious infrastructure problems of the community, which was never previously mapped out with respect to its physical infrastructure. Streets too narrow for the municipal trash collector trucks to traverse are highlighted, while we get a graphic document.

My summer with the community has definitely made clear my personal interests in community engaged design and place making, and the role of art and interventions as being as key to this end as pure architectural or urban design. With my relocation to Boston, and not wanting to lose touch with such projects even on the east coast, I’ve joined the Congress for New Urbanism (CNU) and Boston Society of Architects’ (BSA) Lab for Art in Public Places, both great think tanks engaging in Tactical Urbanism as a means of creating democratic urban spaces. I look forward to collaborating with some great designers and thinkers on interesting projects around New England.

How can one really ease the movement of an outsider in a new terrain or coax entry where all other spatial signs are discouraging for a person unfamiliar with the place. As an architect I understand the principles of urban landscapes and human behavior, while as an artist and designer I want to address the issue in a way that synthesizes the different disciplines. An important component of way finding was the insertion of “attractors” which would be the points of generating interest in an otherwise unwelcoming space, landmark at important turnings and an artistic way of introducing infrastructural support.

It is basic human psychology that we can overlook negatives of our environment, if not associate a positive connotation with a space, if there is a presence of an art intervention in it. It is this very idea that inspires the creation of some of the most beautiful street art / urban installation in some of the most damaged public spaces.

My goal was to install these attractors at strategic points in the village to highlight a range of issues from the reclamation of a space, the cleaning up of another, to bringing light to some of the darkest streets. Like I’ve mentioned earlier, the garbage issue of the community has been a big problem and I’m finding the need to address it in every aspect of my project. It is integral to most of the problems of the community from their own infrastructure to the prejudices harbored by outsiders.

For the past 4 weeks, I had been holding workshops with the kids at making installations from waste to highlight a particular issue that they wish to address in their community. Some of the topics that came up and led to three-dimensional explorations where the concerns regarding dark and narrow streets or stairwells, the water shortage in the area and its wastage, and the excessive littering and spitting of betel-nut juice in the streets. The subsequent urban installations that came up were the students’ interpretations of making others aware of these concerns in the streetscape.

Our project was not meant to be a cleanliness drive for the community. Though we tried to tackle the issue to the best of our ability with the limited resources and time, we wanted to address the larger issue of the mobility through the streets. Therefore, our interventions which include cleaning of certain spaces are tied with the insertion of our public murals/installation in those spaces to highlight our role in reclaiming that space instead of the unusual attention to their duty on the part of the municipal cleaners.

Having established certain way-finding clues to guide people’s movement through the village, we now set about targeting spaces which are either important visual locations in the form of T-junctions & crossings, or those which are particularly unfavorable in passing through by either being too dark, narrow or trash filled. We started to art bomb these spaces. Our interventions are of 4 types – painted murals for striking visual impact, murals incorporating tactile and temporal elements, adding a textural or sound quality to them, to be experienced by touch for narrow streets where people’s instinct is to run their hands along the walls as they move along. Additionally, we are installing installations that incorporate light features for particularly dark spaces, and installations from reclaimed trash for spaces with a lack of adequate surface area to paint on. 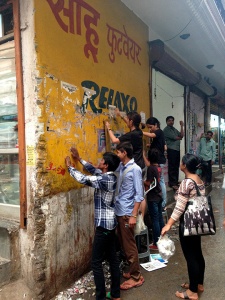 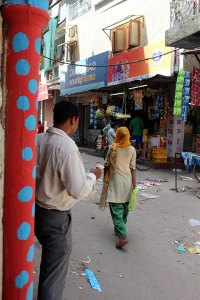 We have been joined by a group of very enthusiastic volunteers from the neighboring Delhi University college – Lady Sri Ram College for Women in this street-art phase of the project, whose creative inputs and mentorship is great for the kids, only exposed to my thoughts and ideas all this while. These volunteers also form an important group of outsiders uncomfortable with entering and engaging with the Zamrudpur community, suffering from many of the prejudices I am hoping to fight. Having a small group actively work with us is a great way to start breaking this barrier, since they go back and talk to their friends about Adhyayan and the community, thus generating an interest among others.

This phase is also an exercise in taking ownership of spaces in the urban streetscape. By marking places that we are cleaning up, with art, the hope is to deter their re-degradation into unfavorable trash dumping sites. This has helped support our arguments and meetings with the government and municipal officials that we are trying to meet weekly, and maintain pressure on to become more active in their dealing with such urban villages.