This is the third of four blog posts for this fellowship, which is pretty shocking for me because it represents the beginning of the end for my summer at the Department of Planning. Time certainly flies when you’re having fun, and this summer has been a whole lot of that!

From a project standpoint, the most exciting news I have for you is that I’ve finally finished the web presence for the traffic education campaign I’ve been working on all summer. You can find the web page on the Department of Planning’s page here.

As I’ve mentioned before, one of my favorite part of this project has been the opportunity to do bilingual graphic design. An important aspect of this to me is not making the translation secondary in the design, which I’ve worked towards by using animation to embed the translation directly into the content. I’ve always thought that the visual presence of two identical designs, one in English and one in Spanish, is a little odd. Where space allows, I prefer to include both languages in a single piece. I think this is stronger visually and sends a more direct message of inclusion (rather than just checking the box of having both languages present).

So far, the first of these graphics has been posted on Facebook, which you can see here. The response has honestly been bigger than I ever could have expected, even getting an article in the local news! I really appreciate the opportunity to have an impact on how sustainable transportation infrastructure is presented on such a public stage.

Another project that has recently come to completion was my bike parking fieldwork, which I mentioned in the previous post. To complete this project, I got the opportunity to enter the data I collected into ArcMap, an industry-standard geographical information system (GIS) and mapping tool. 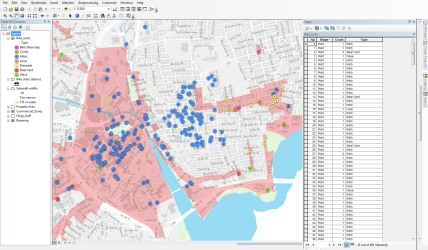 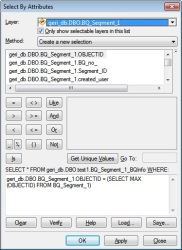 Here you can see an example of the interface and capabilities of ArcMap. It’s an incredibly robust tool for data mapping and spatial analysis. Like any program worth its salt, it does require some technical knowledge – such as the Select Attribute panel pictured to the right, which uses text-based logic syntax to make complicated and specific selections.

As a designer, my experience with programs are from an entirely creative perspective. It was really cool to try my hand with a more technical tool. I’m definitely hoping to build on my GIS education in the future and move my skill-set beyond the creative!

A fun piece of news is that recently Providence has fallen prey to the recent trend of dockless electric scooter share. I have really mixed feelings about them. On one hand, they fill a key gap in sustainable urban mobility, and are shockingly good at solving the last-mile problem. On the other hand, Bird (the scooter company in question) often operates by asking forgiveness rather than permission from city governments. Here is a really excellent article that sums up my apprehensions. For instance, the Providence deployment was poorly timed, coming one day after the city’s press announcement for its new dockless e-bike share initiative with JUMP bikes. This type of “move fast and break things” behavior creates an environment of combativeness between the city and the company, which is regressive to the common goal of creating equitable sustainable transportation options in cities.

Move fast and break things is a problematic business model in urban transportation. comic via the always excellent xkcd

Finally, to finish out the summer I will be working on signage for the Providence City Walk. Signage for wayfinding is something that I’ve been getting increasingly excited about. I see it as a perfect case of the importance of graphic design in civic projects. Pat Weaver in “Wayfinding for Bicycle Routes” writes that “An easy-to-understand wayfinding system helps users understand the bicycle network, and may be particularly helpful to new or infrequent bicyclists.”

This couldn’t be more true. A good wayfinding system can make bike infrastructure accessible, visible, and safe to people who are just starting to bike. As such, it is a crucial part of transitioning people out of their cars and into the public realm.

This map will (hopefully) exist on some of the larger sign types being installed. In addition to making the map clear and accessible, I’m also hoping to use it as a way to highlight some of the cultural landmarks that are important parts of the South Side’s history.

Thanks for reading, until next time!