Activating a space and a community

As I continue my explorations in navigating the streetscapes of Zamrudpur, I can’t escape the garbage problem of the community. While there seems to be a slight improvement in the municipal corporation’s role with our last week’s meeting and the realization of the community towards its power of proactive engagement with the government, and the slight initiative by food venders and shopkeepers to provide dustbins after our weekly community meetings, there is still a major gap in the way the households dispose of their personal waste.

In my master’s thesis, I had explored the potential of urban farming in another urban village of the city involving the strategic reclamation of parts of the Delhi green zone. Though at a larger, more practical scale, I was already warming to the idea of its potential in Zamrudpur. Despite Delhi having a number of optimum conditions for urban farming like the presence of a good soil, adequate sunlight and excess of flat surfaces in the form of waste plots / flat rooftops, not many people are engaging in it. 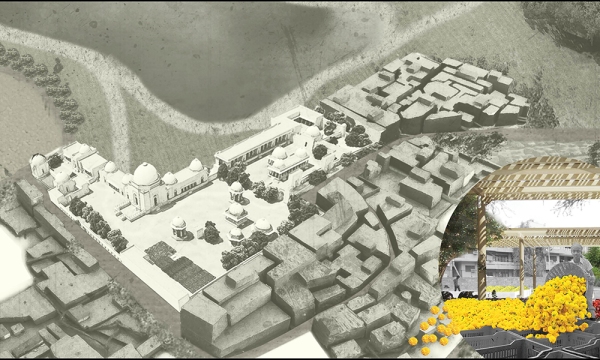 Along with all the navigation and attractor strategies in the village, I felt that urban cultivation could be the vital ‘activator’ for the community. Moreover Adhyayan with its students could be the perfect demonstrational and teaching set up to empower the rest of the community to accept its practice. Most households in the village, though live in tiny one-two room apartments, have access of the large roofs of their buildings that are currently used as spillover spaces. Moreover, the presence of a few families still engaging in dairy production provides the community with free excess manure. In short, they have the perfect set up to start growing their own fresh food, a lot, of which they can’t afford to buy too often from the market.

Additionally, some of my earliest exercises in the village with the children regarding mapping of spaces had brought out the jarring absence of a recreational public space within the community. While there was one small fenced green area, it was being used as an open dump by the surrounding buildings and the residents were accessing the neighboring colony’s municipal park outside the community for recreation. One couldn’t fathom why the community wasn’t actively claiming the park. It wasn’t just about cleaning up the space, there needed to be a conscious programming of the space to prevent its degradation into a dumpsite again. I wondered if a community garden could be that activity.

I came to Adhyayan with the basic idea for this project but once on site and with better understanding of all concerned elements, these 8 weeks have seen a lot of trials, errors and rerouting of strategies. The times when I’m not at Adhyayan I’ve been contacting my ex-professors of architecture, colleagues and friends, discussing the project with them and getting valuable feedback and suggestions. Ravi Gulati is the founder of Manzil, an organization working to empower youth from under-privileged communities to supplement their education beyond academia. Amit, the founder of Adhyayan was in fact a student at Manzil himself many years ago and started Adhyayan wishing to pass on the lessons he learned to the children in his village. Ravi has been a wonderful mentor and guide throughout the inception and duration of this project helping me evaluate and overcome many of the hurdles I faced.

On my mention of my interest of introducing urban farming in the community as another strategy of making them take ownership of their spaces and become an example to the outside city, offering an active and valuable demonstrational attractor, he introduced me to Kapil Mandawewala, founder and CEO of Sanjeev Fresh, an organic farming consultancy service based out of Gujarat, India. One of the key projects that Kapil is engaged in involves educational workshops in urban cities on urban farming. Kapil was kind enough to offer his services to hold a workshop with the students at Adhyayan. I wanted to have these children to initiate the practice in their community and become the tools of teaching the rest of the residents.

A few weeks ago, along with our explorations in way-finding markers and street art we started the process of reclaiming the ‘mandir wala park’ (park next to the temple). I had been in contact with Kapil who was guiding us on how to set up the space and the beds in preparation. Despite being a softscape, the main concern of urban farming here is that raised beds are needed. We procured the soil from nearby construction site’s excavation pit and the manure from one of the community’s cowsheds, all for free. Kapil then came and held a daylong workshop with a few students about urban farming, its practice and benefits. 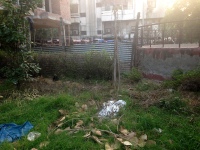 One of the most important components of the workshop was the teaching of the compost creation. We are engaging in ‘Anaerobic composting’ of own kitchen waste – composting of household organic matter in the absence of air, in small containers. This allows for households to compost and dispose of their kitchen waste within their own homes as the container sizes are very small, and cause no unpleasant smells as it’s a closed system process, working with an absence of airborne bacteria. Since this was our first attempt, we worked on only one bed to test the outcome. We planned and planted a variety of spinach, red saag, gourd and Indian radish (mooli) in our community lot, and the children took many seeds home to plant on their rooftops. Our choice for round one was governed by choosing nutritious food sources that had the smallest growing cycle so we could see their progress within my stay and amend any errors for the subsequent planting. 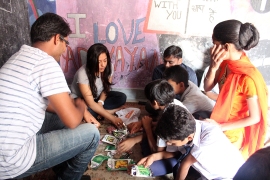 In the following Sunday’s community meeting, we held a presentation and mini workshop for the rest of the community, and handed out different seed packets. Truthfully, I was very pleasantly surprised at the degree of the positive response. There started an interesting discussion that many residents took part in. Actually it shouldn’t have been such a surprise, since almost all the family have rural connections and still have family and agricultural lands that they are connected to outside of Delhi but are separated from in the urban city. 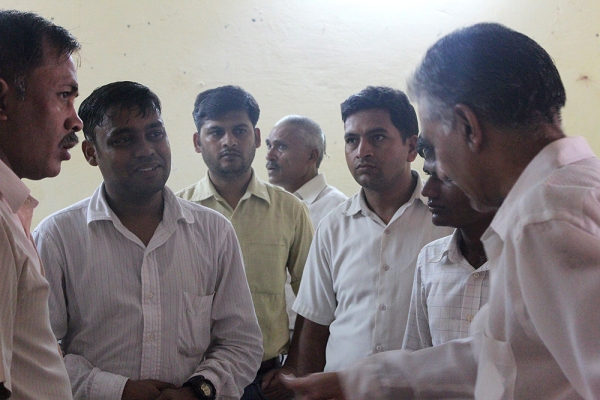 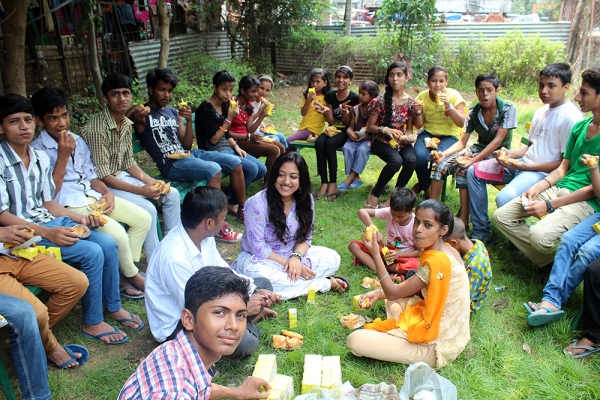 It’s been pretty amazing to see our seeds grow so well! This week we’ve started the process of setting up a few more soil beds! 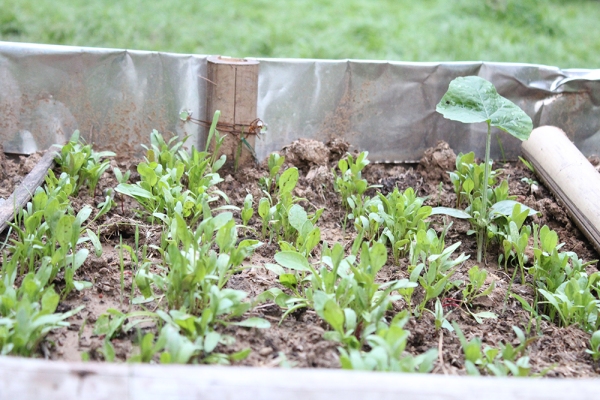