Last week I ranted a little bit about how I still don’t know how to deal with the question “what are you doing this summer?” (even though I’m already going into Week 7 – oof).  So I thought it would be worthwhile to write a bit about some things I have actually been doing.

As you may remember, I’m working with the law firm DeLuca and Weizenbaum in their efforts to launch a new public interest law center in the state – the RI Center for Justice.  In its beta year, the center will be focused on housing broadly defined.  This could encompass landlord-tenant issues, evictions, code enforcement, discrimination, homeless rights, etc.  This year, there have been several community meetings to start conversations about what housing issues could be addressed, and one of the areas that came up as a potential focus was utility shutoffs.

As a design researcher embedded in the early stages of the law center’s formation, my big picture research questions include: 1) How do individuals currently deal with their particular housing issues? 2) What are people’s current points of housing-related interaction with the legal system?  But in order to focus my activities in the short amount of time I have, I’ve been trying to learn as much as I can about the experience of energy insecurity.

This has brought me to the George Wiley Center (GWC), an agency that organizes for policy change on issues including utilities.  Though they reach people from across the state, their office – marked by the giant affordable energy lightbulb in the window – is in downtown Pawtucket: 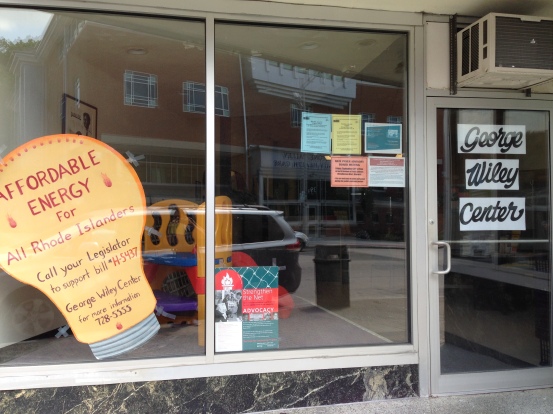 Though their core mission is organizing for policy change, the GWC in April began holding twice weekly “utility clinics” with a new consumer advocate from National Grid.  When people call in with an urgent situation, they can now come meet with the National Grid representative face to face to try to work something out. 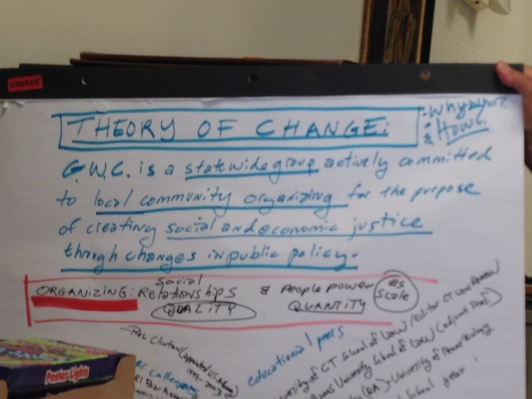 The George Wiley Center’s theory of change: GWC is a statewide group actively committed to local community organizing for the purpose of creating social and economic justice through changes in public policy.

The folks at the GWC have been really accommodating in letting me observe the work that happens at the center.  I’ve been sitting with Roxanne – the woman from National Grid – at the utility clinics, listening and watching during the clinic’s half hour appointments.  I’ve also had some great conversations with the GWC staff and their community organizer, Camilo Vivieros, on topics ranging from utilities, the tension between direct service and policy change, and capturing people’s stories for advocacy.

I’ve been trying to challenge myself to visualize what I’m observing and learning, so over the last week I’ve been working on creating a journey map to plot the experience someone goes through when their utilities are shut off.  I’m hoping this will be a valuable tool for talking both with the GWC and the law center team.  In making this journey map, I’ve thought through more questions and am sure there are things I’ve missing – but it’s a good step in starting to discuss people’s access points to services and where the law might fit in.

A cleaned up graphic

This coming week, I will be going to interview a woman who recently contacted the GWC.  After having her gas shut off for a few months, she’s now at risk for losing her Section 8 voucher.  She needs legal help in her corner, but I really don’t know what will happen with her situation.  It’s an incredible privilege to be invited into someone’s home…and I’m hoping that capturing and sharing her story will help the law center help others with similar situations in the future.

This is a bit of what I have actually been doing – more to come soon.