I heard a story the other day.

The lovely family hosting me are called the Pandeys. Incidentally, they are a family of artists. Anyway, the Pandey’s have a male Dachshund dog called Arnie. Across a small park from the Pandey’s house lives a family with a female Dachshund. This family wanted Arnie to mate with their Dachshund, so they went to the Pandey’s home armed with gifts (a dowry of sorts) to introduce the idea and ask for permission for their two dogs to mate. The Pandey’s agreed and Arnie moved to the neighbour’s home for a couple of days to consumate the agreement. When he returned to the Pandey’s he slept for two days.

There is something so customary about the gesture of gifts and the agreement that was made between the Pandey’s and their neighbour. Traditionally marriages in India are arranged. ‘Love’ marriages are more frequent these days, but still the majority of people enter into marriages arranged by their families.  Customarily, when a woman enters a marriage here, she enters it with a dowry that is offered to the family of her husband. And so it really interested me (and I found a beauty in the internalization of it) that this same gesture that is deeply embedded in tradition, had been extended in this case to the mating of household pets.

I think traditions and their related customs are some of the things that shape a sense of identity and belonging and they ground us in this big world. However, the fact that love marriages are becoming more frequent is a testament to the notion that traditions, customs, cultures, social norms are not static but evolve over time, slowly. Where these small evolutions can be observed, I think, is in the minutiae of every day interactions and attitudes. However, conversely, it is in these same minutiae that we can observe the perpetuation of assumptions that lead to problematic actions and attitudes about so many things.

So Nupur and I have decided to focus our attention on illustrating how the most quotidian of actions in the day to day perpetuate a problematic system of assumptions about sexuality and gender. 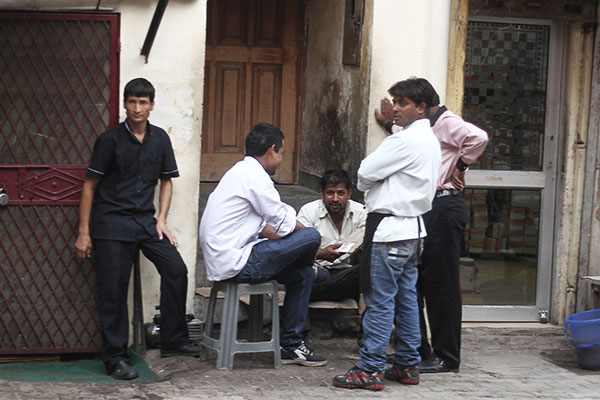