Having been to Uganda once before, I thought I had it covered. But I really didn’t. Without going into a whining rant, here is a succinct list of my so-called struggles during the first week of arriving in the Pearl of Africa: 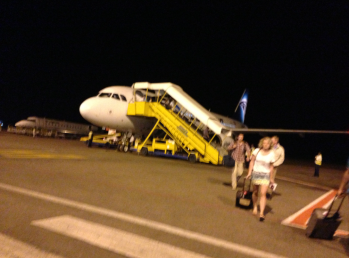 Stumbling out to Entebbe Airport at 3am.

2. My first meal after arriving was one out of the five emergency ramyun packets I brought from the US. It was heavenly.

3. I was called at with a lot of random ni-hao’s and hey, China!’s while walking the streets. I have to make the constant effort to tell people that I am in fact Korean.

4. I slept in a narrow, claustrophobia-inducing bed tent the first few nights, until I ditched it for a mosquito net that would go over my entire bed.

5. There’s a baby and her mother who lives with me too, and sometimes I would find myself talking to the baby in Korean as a strange way of comforting myself in such a foreign place.

6. I have to brush my teeth with bottled water, and I feel like an asshole every time.

7. I have to take large anti-malarial pills every morning.

8. I fall asleep to Rihanna and other random pop music blasting out on the streets of Kiwatule (/chee-wah-too-lay/), right outside my bedroom window.

9. This blog post (among other things) is about two weeks delayed because my Macbook broke down. I will be using a friend’s PC until the replacement part for my laptop flies in from France in about a month. 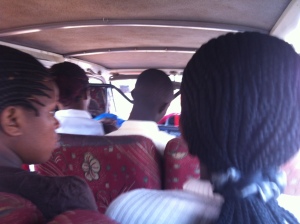 Inside a matatu. It’s pretty cozy.

1. I finally learned to ride the matatu by myself. The matatu is a mini bus/van that crams 14 people at a time. It doesn’t leave until it’s full and when it finally does, it makes several stops every few hundred yards. It is the cheapest but slowest form of transportation besides walking.

2. I finally learned to ride the boda boda and negotiate prices with the driver. The boda boda is the ubiquitous motorcycle transportation that is the quickest, most dangerous, and most exciting way to get around the city. It’s more expensive than the matatu but definitely saves you time. Helmet recommended.

Cheers until the next time my computer decides to work,

Read more from Follow the Fellows, RISD Maharam Fellows, Uncategorized
← BEKANWE! Welcome to Cantagallo
What is the Prison Industrial Complex? →