So What HAVE You Been Working On? | Sarah Alvarez BFA Illustration ’20

It’s content time! :~) One of my biggest weaknesses as an artist is my tendency to forget to reflect on the work I’ve been doing – I’m the type to just keep pushing through, because I’m also the type to always take on an never-ending stream of work. So,

When I was first starting out at IntegrateNYC, I was tasked with looking over integratenyc.org and thinking about what needed tweaking. The biggest thing that stuck out to me was that the website didn’t put any emphasis on the individual members of the organization, while the actual work that was being done revolved around the high visibility of and the strengths + experiences of our youth leaders. Before the website became a back-burner project, I whipped up a little motion graphic fantasy on what team profiles might look like. 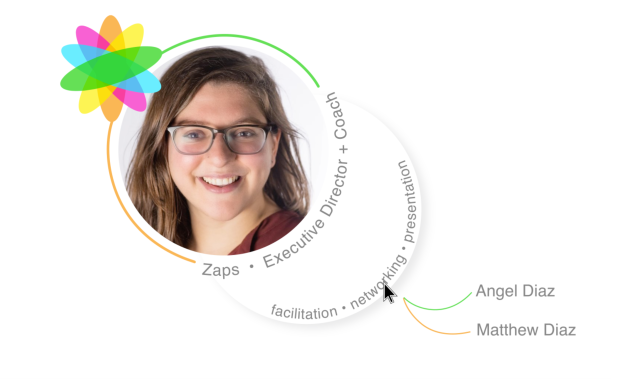 This wouldn’t really be possible for one tiny artist to implement on a Squarespace website, but I just wanted to get across the idea of an activist “web.” IntegrateNYC is unique in that basically all of its youth + adult leaders are involved in a wide array of activism and community work. What connects them, beyond IntegrateNYC, are their leadership skills – I felt like these skills would be a neat way to take a user from one profile to another, so that looking at our team would be like looking at a spider’s web of activism rather than highly individualistic + unconnected leader profiles.

This went a lot of places after this initial sketch, and I’m really excited to unveil the changes to the website at the end of August.

Since the Gala I mentioned in my last post required all hands, I was put on Integrate Museum duty. I had to recreate a litany of “artifacts” from our past work, such as post-it notes that were used to brainstorm when formulating the 5 R’s, signs from protests, and so on. The importance of physical artifacts and the roles museums play in a digital world has been on my mind since spring semester, so this assignment felt timely. Little synchronicities like that are always reassuring for an over thinker such as myself.

^ Two signs from a march hung on the curtain, and a mock sound device permit in the frame.

^ Post-it notes from past brainstorming sessions, a sign from a protest on the right, and a silhouette + sign from a pop-up mural.

What’s so intriguing about it for me, now and in the moment, is the act of recreation. The importance of an activism artifact is the activism itself, and yet these physical objects I created were technically never a part of that. They were representations of a time, fabricated snapshots of the labor and love of the youth leaders who made and marched the originals.

At the same time though, to agonize over  the accuracy of every sharpie’d letter felt kind of… magical? Studying a photo for reference isn’t a foreign act to me as an Illustration student, nor is plain old imitation, but to sit there and tear the cardboard and position the marker and capture the natural handwriting felt more like a performance within itself. I could never embody these young leaders, but I can pay them homage. I can give their labor physical space and a paying audience. It’s hardly praxis, but it’s certainly a tender moment – it was nice to see the youth leaders who once held those signs or write the post-its come back and re-live their work.

There were lots of little things that came after that. Thanks to the trust of my supervisor, I’ve been able to infuse design into all of them, regardless of whether they even really called for it. :~)

Like I mentioned in my previous post, the NYC DOE passed 62 policies based on the recommendations of our student leaders. I worked with my supervisor to summarize those policies in plain language, and then made them into little images that could be easily shared on social media. Here are some of those: Speaking of social media, I’ve been working on that too! Follow us on Instagram @integratenyc or Twitter @integratenyc. I made a really long thread about how segregation in housing leads to segregation in schools, which you should definitely check out if you want to get educated!

Another small project highlight is a grant report I helped complete – usually these are just plain write-ups, but I convinced my supervisor that it’d be even better with a companion pamphlet with photos from our work over the year. I can’t show you the finished version we sent in, but here’s an early version of one of the pages:

Even though these pieces aren’t revolutionary by any means, I feel like it’s an important reminder that sometimes creating a visual is literally just about making things clearer for the consumption of the majority. There’s a lot of pitfalls in that, namely in that working for the majority often means excluding many vulnerable people, but it feels good to be able to simply share the things we’ve done as an organization with the people we’re doing it for.

The “big” project, which has taken up a huge chunk of time for us since the Gala, is putting together materials for Integrate’s Back to the Vision Board campaign.

^ Here’s a graphic I made to promote the campaign! Essentially, from August 5th until September 5th, we’re pushing to reach our first fundraising milestone of 75,000 by the time school starts back up for NYC students. Our first milestone towards what, you ask? We have the pretty lofty goal of raising 1.1 million dollars over the next 5 years – that’s a dollar for every NYC student.

Besides coordinating the outreach to fundraisers and participating communities, I made a campaign video! It was incredibly challenging to stitch together videos from multiple sources (shot with all types of equipment, I may add) in order to create a cohesive narrative, let alone create one that paints a clear enough picture of IntegrateNYC to convince the viewer to donate. I could have tweaked it forever, but if you want to see how it all came together by the time August rolled in, here it is:

Next week we have our Summer Institute, during which I’ll be teaching a small workshop on Artivism in history and in practice. I’ll be sharing that lesson plan with y’all in my final update, as well as a website unveiling, some more social media stuff, and reflections on the Summer Institute (and the whole IntegrateNYC experience).