I feel the last bit of a project is always the toughest to get through. One can see the finish line, but they don’t want it to end so quick. I have been in that phase for a few days now. Following my last post I spent two rigorous weeks of being indoors, illustrating, editing text, compositing and laying all of this out into files ready to be printed. The week hence has been a whirlwind of getting the production right.

After failed test prints(print colors which made me want to weep), re-iterations of the box (sitting cross-legged with local book-binders to teach them how to adapt their technique to my purpose), and being told what I was trying to do is not possible to manufacture locally; I decided to do things at home. Armed with a home printer, a new CMYK ink cartridge, and some charcoal paper, chopped to size, I was ready to produce 2 copies myself, and demonstrate that what I intended to produce was not as impossible and could well be done at an acceptable cost.

Considering that I had to print on an A4 paper size, I set out to cut sheets of the accordion book and glue them together. Here’s an image of my initial test prints. For a relatively worn out home printer, I was pretty happy with the results. 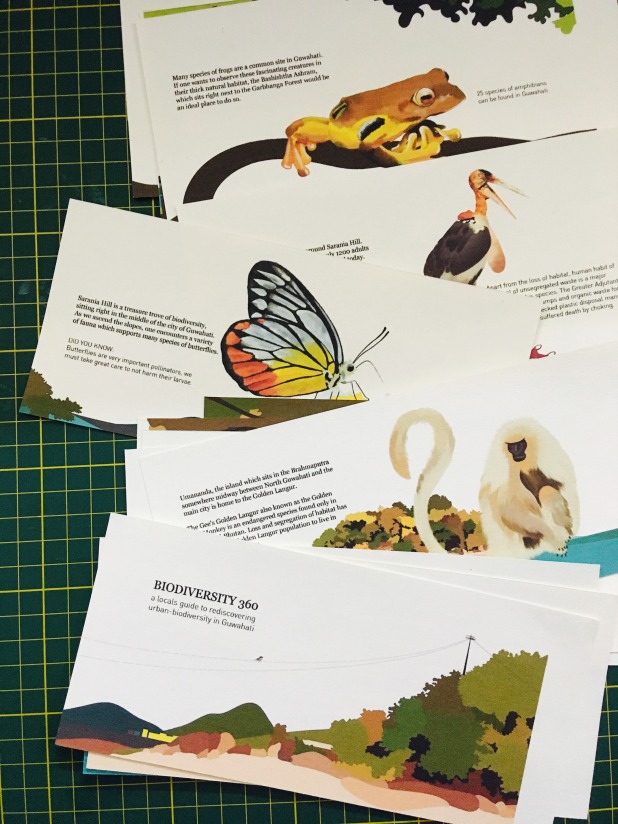 Having learnt from my experience with the local book binders, I decided to adapt to the production techniques they were more familiar with. I also used the opportunity to re-look at the external form and introduce a more sleek exterior. Having played with a few ideas I decided on the version you see below. 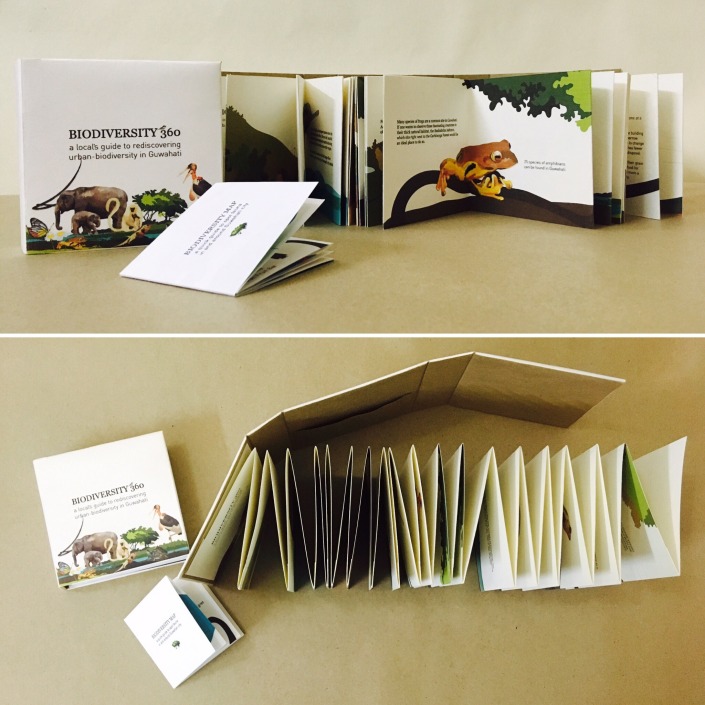 A simple 3 flap book (less of a box now), with a pocket for a folded map, showing the ideal location for spotting each species.

The entire book covers a total of 13 species, 5 of which are endangered, 5 others which are spread in and around the city and 3 which can be spotted in many backyards. Apart from discussing fascinating features of the species and the result of human impact; the book also hints on changes we could incorporate in our lifestyle. The book even mentions count of classes of vertebrates that currently inhabit Guwahati, hoping to share the scale of impact human activities could have on the entire ecosystem.

The good news is, these prototypes have had a great response. I haven’t yet had a chance to test them with a teenage audience or younger; but had the chance to do a test run with a few small groups of adults (3-4 people). They all seem excited and some even started swapping stories of where they had seen a particular bird, or how they had first discovered the bat colony. Over all, I was pleased because my intention of getting people interested seemed to have had the desired effect. Some people also tended to interact with the object merely intrigued by the length (when completely unfolded) of 12 feet.

I had a chance to share the idea with the local Deputy Forest Commissioner, who has shown initial interest and wants to start incorporating design ideas within the space at his disposal. Some of which he wants to adapt from this book and bring out into the public spaces and programming at the Assam State Zoo.

Through Help Earth, we are also approaching possible investors, to gather enough funding to produce a larger amount. Currently the organization is funding a production of 20 copies, to be distributed and shared with officials, who might be interested in helping us take this project forward.

Meanwhile, I had promised Kevin, that I will share a bit of my experience of the changing city of Guwahati and the relevance of this project in light of the changes I see.
It has been two months since I got here. I plan to leave in another week and a half. But I think I will leave that description for my final Maharam post. I have been incredibly lucky to work with Help Earth, and I am inclined to come back. I most likely will.

Until then, I look forward to sharing a post with some background information about the city, a final update on the printing success (hopefully) of multiple copies and my future plans of taking the Maharam experience forward.