Having mentioned the Museum in a Box in my last post, I thought I should start here by introducing a bit of background information.

The Museum in a Box is a concept generated in the hope of reaching audiences not often inclined towards visiting conventional museums. The first version was produced at RISD, with the intent of raising awareness and disseminating information about pangolins, an endangered mammalian species. Pangolins are fascinating, yet little known creatures. Here’s an image and a link to the Museum in a Box for Pangolins. 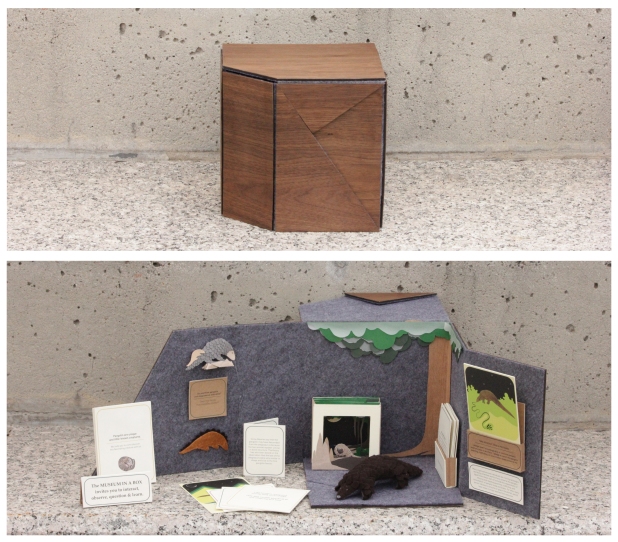 Museum in a Box is not a new concept, It has been used by traditional museums to engage with audiences and have a wider reach. In India, there are beautiful museums, but we don’t have as many as we could possibly need and the ones that exist are not visited or appreciated by audiences as much. As an Exhibition and Spatial Designer I wanted to contribute through the medium of a museum but had the urge to give it a shift from the traditional form. As many of my friends and colleagues work tirelessly to get more people interested in beautiful museums, I try to work towards taking museums (or their parts) to people. For essentially a museum is a learning experience of interactivity and immersion. Hence the need for museums to be put into boxes and shipped.

While the above Pangolin Box was hand made by me and only two pieces have been produced so far, for the current project I had to think differently. I needed to find a way to put information in a box, in an interesting way, yet a form which can be locally produced in multiples. As I conducted my research about the local Urban Biodiversity of Guwahati and started looking at the production possibilities in this city, (economically viable as well as good quality end products), a simple form emerged.

A magnetic box, which folds open, to reveal an accordion book which is about 360 cm long. The box will also contain a map of the city of Guwahati to identify the spots being discussed for viewing certain fauna. The text for the box is aimed at the locals, who are urged to walk around their city and discover some more about their co-inhabitants.

The book starts by cutting through the city in a rough cross section, and then takes people to two nearby wildlife sanctuaries (within two hours of driving distance) and finally to their own backyards, where often some species can be spotted and admired.

Starting with the Gangetic River Dolphin and Golden Langur both of which are endangered species, the book takes its audience through the city and 12 amazing animals, urging them to walk around and spot each of these creatures. Scattered with some ‘did you know?’ questions and some action statements about small changes we can make to help these species, the book tries to increase the curiosity and sense of ownership among locals. I must admit, by no means can this be a comprehensive study of all the species in the region, but this is simply meant to raise awareness and curiosity. I look at my work as that of an intervenor who facilitates the increase of interest. With all information available online one can always find more if they know some basics.

Also to support the dissemination of these boxes, we plan to produce some t-shirts and posters, to share online and locally in the hope of increasing participation and interest.
The future plan primarily includes the sharing of the box with eco-clubs in local schools so that students can be involved in the process of identifying and admiring urban bio-diversity. Having had an initial conversation with the local District Commissioner and received primary interest, my supervisor feels that the project could have a long term impact. More updates coming soon on that front after the governmental pitch. We are busy producing prototypes of posters, t-shirts and the box- to bring along for the pitch.

Here’s a sample image, with an illustration of the Greater Adjutant Stock, approximately 2000 of which remain on the planet. These scavengers depend largely on organic waste for food, so by segregating waste in households and at collection sites, we can save many of these birds from choking hazards. Encroachment of habitat is a problem we cannot immediately solve, but waste segregation can definitely be taken care of, by us, now. 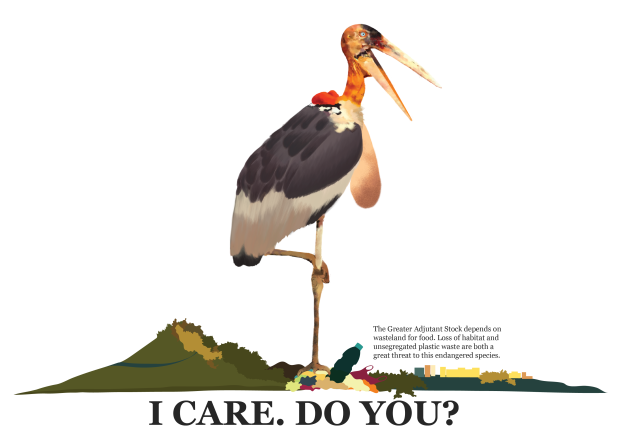 Similar to the one above there are others within the series of ‘I Care. Do You?’ visuals.
Moving ahead, I am working on simplifying the visuals to make them fit for silk screen printing on t-shirts. I am also working towards having a first finished prototype of the Museum in a Box by the next weekend. For the same I am trying to outsource the printing and box manufacturing, for through the prototype we would be able to gauge the quality and cost per piece. We aim to print at least a hundred of these to begin with.

In the meantime, I am informally learning a lot about frogs and am all set to start exploring the pygmy hog in another two weeks or so. My supervisor has been kind enough to offer to put me touch with a local breeding center and another one at the Manas National Park. The progress on this front depends on the successful and timely execution of the box. If not immediately I know it will happen when the time is right.

I might also mention that I am considering sticking around for some time longer even after my promised eight weeks of internship are done, as the organization has given me a window into affecting change, towards reviewing the human relationship with nature.