Hello again – time to update you all on the progress of my Maharam! At this point, summer is almost over, but I feel like I’ve barely grazed the surface of the possibilities of my project. I only have a couple weeks of classes left, and while I don’t think I have reached my ultimate project goal just yet, I have already learned a ridiculous amount from my time with DIIRI. Here is what we have been up to…

This is an example puppet that I made depicting my high school uniform (yes, I wore a kilt for four years). The theme of this project was “Home”, so I encouraged the women to make a puppet about their native culture. Note Natasha’s swimcap-wearing puppet next to mine!

Class Four was hosted by my friend Natasha, a rising senior at RISD studying Film, Animation, and Video. Natasha does amazing illustrations and is a really fun person to be around, so I thought that she would be a perfect addition to my class. She was also excited, and we agreed to make puppets using paper, Sharpies, and brads. Natasha originally intended to also teach the women how to animate their puppets, but I had to draw the line there. As I discussed in my last post, showing not telling is the most effective way to communicate across cultural and language barriers, and teaching advanced computer programs does not even come close to the language capacity of our new neighbors.

Nonetheless, the women very much enjoyed the project and laughed the whole class. I made my high school puppet as a way to again demonstrate showing, not telling, and I explained how it represented something from home (I doubt that my school uniform from Pittsburgh, PA looked like theirs’). I suggested that they make a puppet wearing traditional dress from home, or a puppet of someone they knew from home, or even a pet from home. Anything to get them thinking about how to visually translate their past and to look forward to sharing it.

The whole idea of showing, not telling went over better this class – I was right to try to shift away from focusing on talking. This time, the women did differentiate their projects from each other (except for Sadia, who drew me!), but they were still staying within the “zone” of my example – a human puppet wearing particular clothing. I am not upset about this, because the results all varied widely (see below) and it might be something that is simply part of the learning process. Above all, they love working with their hands and learning new skills, but we are sharing less stories than I thought we would be. I have yet to decide whether or not that is something I should address – is it enough emotional catharsis to only create art and not talk about it openly? That goes against what I’ve learned at RISD about process and critique, but I think that this might be yet another usurping of a preconceived notion.

This is Soukaina’s puppet! After finishing it, she then proceeded to amaze all of us by designing an intricate henna pattern on paper. Rest assured, we will now also be using henna in class.

Class Five continued my new model of focusing the class on making. We didn’t even share “One Great Thing That Happened To Me Today” in the beginning of class, because everyone came in and just got down to work! This was a more comfortable environment for me – a group of women all sitting around a table cutting paper and coloring with pencils and chatting amongst each other (in Arabic, Spanish, and English). There was no pressure to do anything; we were all just spending time with each other making art. It was lovely.

This is Maha’s puppet of her brother – it elicited a lot of jokes about him and his apparent lack of a neck. He also happens to attend classes at DIIRI, which made it even funnier for the people who knew him.

We also gained a new addition to our class, a twelve-year-old girl named Aryana who is the daughter of DIIRI’s Director of Refugee Resettlement and Case Management. This is a truly intergenerational class now, and at least I’m not the youngest anymore! Class Five ended up running late, because everyone was so focused on finishing their puppets. As a result, we didn’t get a chance to share our work. So, while the last people were rushing their puppets, I asked the women to stand up next to the bulletin board and talk about it while people were working. This worked to an extent, but our sharing soon became derailed when other conversations were sparked in response to some people’s work. But, regardless, I am very pleased with the results, and I think that everyone enjoyed puppet-making! 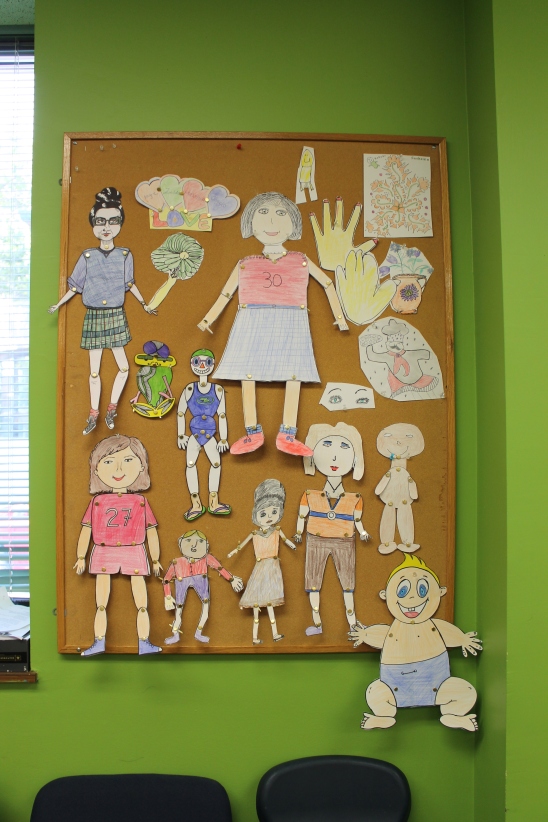 Class Six was taught by both a friend and an old professor of mine: Coleen, one of my closest friends in Apparel at RISD, and Maha, the first professor I ever encountered in the Apparel department. I thought that Maha would be a wonderful teacher to my class because she also is from Syria and speaks Arabic. Not only that, but she creates awe-inspiring collections and teaches for a living. Coleen is working as an intern for Maha this summer, so she also joined us as an assistant. They ended up being a big hit, especially with the Arabic-speaking women.

After discussing it with Maha and Coleen, we decided to make pillows. Apparel construction is a very useful skill to have, but in the allotted time of 1.5 hours it is impossible to teach that (the idea of teaching patternmaking across language barriers is a nightmare to me). Maha demonstrated how to rip the muslin along the grain, how to effectively iron it, how to hand-stitch in a straight line, and how to turn it inside out and stuff it (all things she also taught me two years ago). Pillow-making was hard for a lot of people, and I don’t blame them! My first year in Apparel was very difficult as well. Maha is meticulous when it comes to construction, so she held my students (and me) to a much higher standard of quality than I do. While I think that is good in the long run and motivational to an extent, I will not be pushing quality as a priority because I feel like that would deter any newcomers to art. For me, art is more about the process rather than the product; anyone can learn how to be technically savvy, but the content is something else entirely. This project is all about introducing the arts into the lives of people who have undergone a great deal.

Sadia (on the left) shared with us (using Maha as an interpreter) her previous experience using the fabric muslin for making cheese and diapers.

Class Seven was canceled because I have arrived at an interesting time in my summer. The Maharam is my central focus these three months,  but I have also recently started a workshop run out of RISD’s Executive Education Department called The Institute for Design and Public Policy. For five days, I will be learning about the design-thinking process and how I can apply it to the public and private sector to redefine the idea of civic duty. So far, it is essentially me with a group of nineteen company executives who are all at least twenty years older than me listening to speakers trying to explain how artists think. Don’t get me wrong, I’m only two days in, and I’m overwhelmed with new information, but it was very interesting listening to artists try to make the design-thinking process accessible to non-creative thinkers. It is such an abstract concept (and kind of funny trying to articulate how my brain works), but it really makes clear to me the valuable role that artists have outside of the art world. The way we approach problem-solving and our experimental process that values failure as a means of growth is apparently unusual but revolutionary (especially within the government). I am very interested in this idea, and I plan on pursuing it after graduation. This Institute is also highly relevant to my work with DIIRI, so after I complete it I will share with you everything that is applicable!

I tried to find a way to keep the class going (playing with a homework assignment, open studio, guest teachers, field trips, etc), but in the end it was easier to communicate that the class was simply canceled. There is a second class that I have to miss for this Institute, but that day will be facilitated by Sagitta – the show must go on! And, to top it all off, I am finally getting the details finalized to introduce community partnerships – for Class Eight we will be visiting the Providence Children’s Museum to expose the women to arts organizations in the community and potential outlets for their children. A few classes later we will also be visiting CityArts! There is a lot going on, but then again, that is not unusual for the Maharam.