I had an intense conversation with Michelle the other day.

So much of what we’re able to do is dependent on funding. Anyone who’s worked at a non-profit for even a week will be able to tell you that much, at least; I know it’s naïve to think otherwise. But something about being in a school where we are encouraged to think without limits and see where we can go without the weight of officiated standards and constraints makes you forget about all of that.

Books to Prisoners is waiting to hear back for funding renewal from a foundation that allowed them to expand their operations in 2015. Its increased hours and ability to pay Michelle $15,000 a year for her commitment to come in four or five times, 15–20 hours a week are all made possible by a grant that it received from a foundation (or it might have been the state…) that distributed money that it won from a lawsuit to non-profits. Michelle told me this one year ago when I told her how impressed I was by their frequent volunteer hours—as compared to the once, twice, maybe even three times a week schedule that other prison book programs maintain, Books to Prisoners holds four four-hour volunteer sessions a week, spread across three days. Michelle is the only paid staff member that I’d come across in my visits to the various programs.

Unfortunately, part of the reason why the organization struggles to keep afloat is because it falls in a very specific niche. It’s a Seattle-based program that serves individuals outside of Washington state—it’s too big for state-specific grants, too small for federal grants, and it provides educational services but isn’t exactly a tutoring program. Our neighbors at the food bank, on the other hand, have just relocated to a shiny, brand new space two blocks away from a steady flow of funds from the city that have supported its cause to help Northeast Seattle neighborhoods.

I asked Michelle why the different programs across the country didn’t come together to form a national coalition. Thirty different programs across the nation helping the same people and the same prisons—surely, uniting would raise the chances of getting national funding? Michelle argues against it; it’s been talked about before, but the transition would take years and years and perhaps prove to be more trouble than it’s worth. Not only would the organization have to register in all 50 states; it would also have to pay taxes, re-organize and/or re-establish whatever community ties that each prison book program already has to its city/state and go through all the efforts of joining the thirty other organizations—who may or may not want to team up—all for what Michelle considers a “crap shoot” chance at receiving one of the bigger grants.

“So what happens if you guys don’t get the funding this year?”

“We go back to reduced hours. The letters will pile up, and worst case scenario, we end up like the other three organizations and fold.”

It’s hard. As an outsider, the solution always seems so easy, but I always forget that Books to Prisoners is entirely run by volunteers, mostly unpaid. Staff meetings are held once a month by key holders (and the last meeting in June was cancelled due to scheduling issues.) Change only happens in these monthly-increments, followed through and facilitated mostly by email. And changes that happen with the packages are even slower. A successful package delivery is often one that three weeks to send out; we don’t hear of rejections until months later.

I was asked to present at one of these monthly meetings yesterday. I showed everyone the work that I had done in the previous summer, creating a website prototype to house some of the more memorable letters, and creating a photo grid of the different packages that were sent out to prisoners.

I also presented a pdf of what I worked on for the past month, which was a reference guide for volunteers to understand the specific procedure on how one volunteers at Books to Prisoners.

The design for it was done so that it could be easily printed out black and white on six 8.5 x 11 sheets of paper, double-sided, and stapled. The pages are numbered so that missing sheets can be accounted for.

We also carried through with the conversation on the book. I presented a direction for the book that I had been working on for a couple of weeks; after scanning all of the thank-you letters that BTP had received from inmates a year ago, I pulled out key statements from each of the messages and type-set them. I placed the scan of the original letter and envelope in the spread afterwards so that the reader could read the statement in context and also observe the inmates’ handwriting and every detail that comes along with the information.

We are hoping to also include some statements and/or essays from prison activists such as Angela Davis, Michelle Alexander and Noam Chomsky.

What I hope will come across in these pages, however, is how little difference there is between someone behind bars and someone outside of them. Every time I read a letter that asks for books for vocational training—on learning how to sew, to cook, to write—I think about my friends who talk about their summer plans, who strive to make this summer the summer that they finally learn how to do yoga, or the summer that they start writing again.

The other day, I was scanning a letter from an inmate who wanted to use his time effectively by teaching himself how to code and program. It felt heavy, heavier than the others because of all how urgent it felt. I thought about all of my peers who feel the weight of gaining employable skills, of learning how to get a job at Google or Microsoft. It could have easily been written by an acquaintance, a friend, even myself. 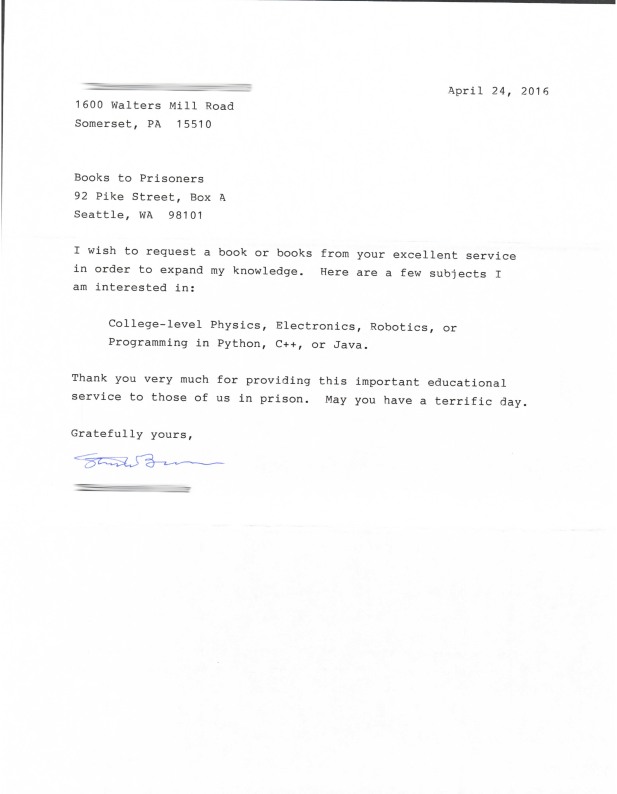 The same applies for world events. Last weekend marked the anniversary of the Supreme Court’s ruling for the legalization of gay marriage. In August last year, I had been scanning letters at LGBT Books to Prisoners to find this letter: 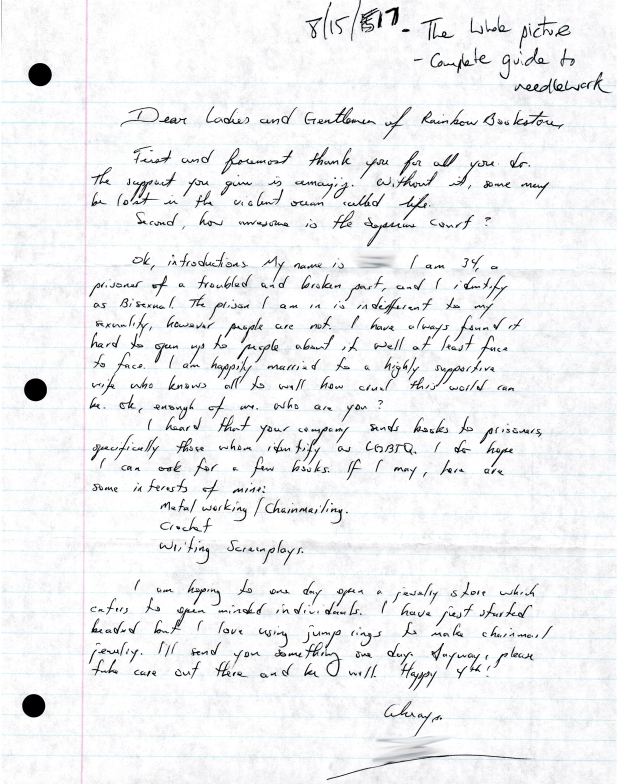 We are all affected by the same laws of the same institutions. The bars aren’t really there, if you think about it.