I must first and foremost apologize for how long it has been since our last post! It has been a little over a month since Lyza and I have returned from our summer abroad in the Philippines, and I have finally been able to process all that we’ve seen and done this summer! 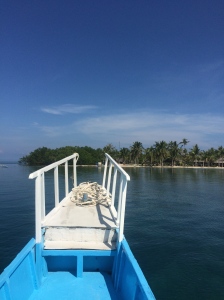 Our final few weeks in the Philippines were, as expected, rather emotional. In between our monofilament woven fabric not being sewable, flash storms dictating our work schedules, and emotional goodbyes, our final weeks felt like they were moving far more rapidly than those prior.

To quickly sum up what happened those final weeks, it must be known that thick monofilament and raffia woven fabrics will not sew!! Our initial plans to work with this fabric, to create a textile directly reflective of the community’s marine-based economic past and raffia-based current situation, proved futile when our handiwork began to fall apart in our hands as we tried to sew this fabric.

Very quickly we had to make decisions and begin new operations. These fabrics would have to remain as purely decorative; they would become scarecrows or wall-hangings. We then decided to collaborate with a local crab trap weaver to develop crab trap and fishing net bags. What began as a few rough sketches to Pandan’s local crap trap maker, Dodong, eventually became a system. We would talk to Dodong about our ideas for the bags, and he would be ready with them the next day. Particularly exciting was when Dodong began presenting us with his own designs, or with bags embellished with coconut husk beads his wife had made. To see this creative spark in him, that in itself was encouragement enough.

All the while during this emotional time, Lyza and I were scrambling to get our diary entries sorted in time to print the book we were working on, “Dye Trying”.

An excerpt from the book:

It is our last day in Bohol and we are leaving the loom weavers the same way we came, with meryenda; we are having pancit.

The first goodbye we had to say was to our island staff and boat crew. With a heavy heart we said goodbye to Neneng, Rose, Genaro, Ompong, Botyok, and Metring, and boarded the boat to head toward to Tubigon for the last time.

Upon arriving at the loomweavers co-op where we were greeted by Trina and presented a card of thanks from the co-op. We had our pancit and had to say goodbye to the co-op and those such as Victor, Peter, Ronillo, Stephen, Don-Don, Misael, Amay, Ruth, Carmel, Erning, and Fidel, who had helped us so much.”

Our nine weeks were not nearly enough time. Although our initial plan went awry, it was our second plan, of working with Dodong, that made our initial goals, of connecting with both the fishing community and weaving community a success.

We leave the loomweavers co-op with 10 scarecrows, two wall hangings, 7 backpack prototypes, and the hope that they will continue to explore the ideas we have only begun to explore.

We are not sure whether or not the co-op will decide to further pursue the idea of the fishing net and raffia bags, but we can only plant the seed and hope that it the preparation that went into it will be enough for it to germinate and grow.

The talented and sharp minded people we were fortunate enough to work with in Pandan and Tubigon have us leaving feeling positive. We hope to return to Pandan in a year or so and seeing the fishing net bags worn by the community.

Since returning to the states, Lyza and I have exhibited a book featuring dye recipes, diary entires, and observations published by Hardworking Goodlooking, and exhibited at the New York Art Book Fair at MOMA PS1. 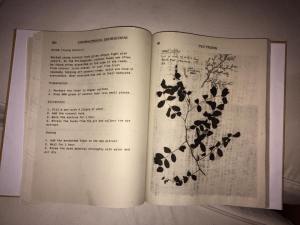