The danger of neonicotinoid insecticides

As I have been researching the potential causes of dwindling honeybee and wild bee populations, one name continues to rise to the top: Neonicotinoid insecticides. Neonicotinoids are a class of insecticides that affect the neuro-activity of insects. And, because of their lower toxicity to birds and mammals, have become the most popular insecticides in the world. The Neonicotinoid pesticide family is composed of acetamiprid, clothianidin, imidacloprid, nitenpyram, nithiazine, thiacloprid and thiamethoxam. Imidacloprid is currently the most widely used insecticide in the world. 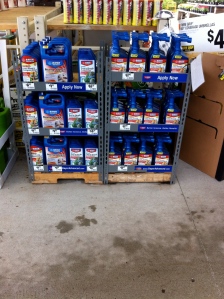 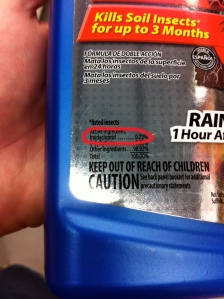 These insecticides can be used as a topical spray to already developed plants and can also be used as a treatment coating to seeds making the insecticide systemic. Systemic insecticides are particularly effective because the chemicals are bound up in the whole of the plant, meaning it exists in the roots, the leaves, the pollen and the nectar. Neonicotinoids are effective at killing pests right away, however, to honeybees and other pollinators, they are sub-lethal. They do not kill adult honeybees and are thus deemed “safe.” In a honeybee colony, though, these insecticides work on the superorganism as a whole, affectively sickening and ultimately killing subsequent generations. The methods used for testing efficacy and safety of these chemicals looks only at adult bees and though the evidence suggests these chemicals are harmful to bees, they are still used. These methods of testing are a huge part of the controversy around honeybees and Neonicotinoids. See this article for more.

At present, virtually all corn planted in the Midwest is treated with at least one form of Neonicotinoid insecticide. Additionally, many plants being sold at Home Depot, Lowe’s, Walmart and other big box stores have been treated with Neonicotinoids before being shipped off for sale to the public. There are currently no warning labels on plants that have been treated with these insecticides so consumers are unwittingly buying and cultivating plants that are detrimental to pollinating insects.

The danger of using insecticides is not only that non-targeted, beneficial insects (like honeybees) are often exposed and killed, but also how these insecticides interact with the ecosystem as a whole. As exemplified in her alarming Silent Spring, Rachel Carson writes about the impact chlorinated hydrocarbons (DDT, DDD) and organic phosphorus insecticides (malathion, parathion) have had on the predators of treated insects (birds and fish). Scores of dead or dying birds, fish, amphibians and small game were found in areas treated with these insecticides.   The animals had been eating the poisoned insects and were thus becoming poisoned as well.

Biological amplification or biomagnification is an extremely interesting phenomena. It is the process by which poisons or heavy metals move up the food chain. Little fish consume a bunch of insecticide laced mosquito eggs, a larger fish then eats a bunch of these little fish, still a larger fish eats these fish, an eagle or hawk eats the big fish and so on. As the animals are being consumed, the concentration of harmful material (insecticide for instance) is being concentrated. Many insecticides are fat-soluble and become stored in the adrenals, testes, thyroid, liver and kidneys. High accumulation of poison in these organs can ultimately lead to mutations in genes, sickness and death.

Through her work, Carson was able to bring broad public awareness of the environmental impact DDT was having. DDT has since been banned from agricultural use worldwide.

It does not seem coincidental that dwindling of bee populations of the last decade has coincided with the increased use of Neonicotinoid pesticides. In fact, earlier this month two of the largest Canadian honey companies filed a lawsuit against Bayer Cropscience Inc. and Syngenta Canada Inc. claiming negligence in “their design, manufacture, sale and distribution of neonicotinoid pesticides.”  READ ABOUT THE LAWSUIT HERE.  Though Bayer continues to claim the risk to bees from these pesticides is low, mounting evidence is claiming the opposite. This issue will surely continue as long as there is profit to be made. It is high time we look for safer alternatives for dealing with problem insects.

CLICK HERE FOR MORE INFORMATION FROM THE MAINE STATE BEEKEEPERS ASSOCIATION ON NEONICOTINOIDS.

Read more from Follow the Fellows, RISD Maharam Fellows
← DC goes 3D
A farewell to the Porvir office, but thank-heavens for Skype! →