For my project, I’m conducting follow-up research on Three Mile Island over the summer to commemorate the 35th anniversary of the nuclear accident. My goal is to approach the incident from a humanistic perspective, interviewing individuals who were involved to understand the social & psychological effects of the accident and its ensuing politicization. Using the interviews and additional research, I plan on creating an artistic re-telling of these stories to be dispensed by Three Mile Island Alert, a local non-profit organization that works with TMI & the NRC to promote safety efforts, in an effort to reach out to younger generations, such as mine, so they may know the people of TMI as well as the story.

For the past several weeks I’ve been reading up on the subject, getting info from Dickinson Library and prepping interview questions.

This past week has been my first on the job– here are a couple of the interviews I’ve conducted so far:

RB Swift: A statehouse reporter who covered the incident as it happened.

This is RB Swift in his office at the Pennsylvania Capitol.

Demonstrators were setting up inside as I made my way to the atrium.

I also interviewed Ralph DeSantis (who was kind enough to give me a tour of the facilities at TMI)– he’s a Communications Manager for Exelon, who are contracted to monitor TMI Unit 2. 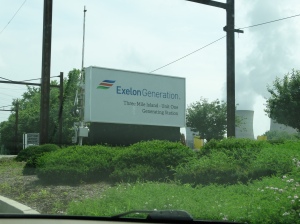 This sign marks the entrance to the bridge that leads to Three Mile Island. The distinctive cooling towers can be seen in the distance.

Mr. DeSantis standing inside the TMI training center, which features an exact replica of the switchboards inside the plant. Workers must train here for 18 months to be certified to work in TMI.

A view of what the inside of the TMI control room would look like. Taken at the training center across the river.