A few weeks ago, I received an e-mail from Mariana, who worked with me at the International Development Design Summit (IDDS), in 2012. Mariana was organizing a workshop in a community in the outskirts of São Paulo called Vila Nova Esperança. The workshop was geared toward teaching basic electronics and soldering by means of a small LED flashlight. At Porvir, I am reading and learning about all these incredible projects and education initiatives, but I was itching for some hands-on work to apply what I am learning. This opportunity came in perfect time, and I hopped on the chance to visit the innovation center.

My arrival in Vila Nova Esperança was quite a journey. First, I took a metro to the Butantã station, where I met up with Lucas, an engineering student from São Carlos, who was spending his vacation in São Paulo. Lucas had been to the center a few times and offered to accompany me there for the workshop. From Butantã, we took a bus ride through the periphery and got off in front of Jardim Amaralina, a gated community about 20 minutes outside São Paulo. From there, the bus continued on its paved route, and we turned onto a dirt road. As we walked, I began to notice the distance between concrete light posts becoming greater, until about 200 meters into the dirt road, where they stopped completely. From that point on, there were tall wooden posts with dozens of wires wrapped around each one, all guiding our way toward the community. Lucas had told me about the “gatos” (“cats”) before arriving, but when I told him not to be silly, that I wasn’t afraid of cats, he just chuckled. As soon as I arrived, I realized what he meant. In Brazil, “gatos” are a euphemism for illegitimate electrical hook-ups, on which many of these communities depend for electricity.

After about 15 minutes, we arrived at a series of brick houses stacked along the side of a hill. Lucas led me to a half-dirt, half-concrete stairway, which left us at the community’s main road. Along this trek, he told me a little bit about the community, and the people who were living there today. A majority of  the inhabitants of Vila Nova Esperança, or VNE, as it has become, came from the Northeast of Brazil, Bahia, in search of better work opportunities in São Paulo. When realizing that life in the megalopolis was quite a bit different than imagined, there were few options to settle. They began settling on this hill, neighboring an ecological reserve. The location is right on the border between two cities: São Paulo and Taboão da Serra. In Brazil, we say “Quando algo é de todo mundo, não é de ninguem,” meaning, “when something belongs to everyone it belongs to no one.” As a result, neither city takes much care for this land, and people began to settle on it. Now that the community has grown to about 3,000 people, the cities still refuse to provide amenities, as the land was originally illegally claimed. These complications make basic services such as water and electricity a serious problem at VNE, which explains the gatos we saw along the way. Another issue is the lack of bus routes that reach the community, as the roads are not paved. Again, the city refuses to pave the roads so the buses will not make it there any time soon.

The Innovation Center at VNE is currently housed in the garage of the community’s elected leader, Lia. Lia is a true matriarch, and has been democratically elected as VNE’s community leader several times in a row. While her husband runs a convenience store beneath their home on the main road, Lia is battling at the government offices for public services. The idea for the innovation center first came out of a project from the NGO Teto, which brings volunteers to communities in need and spend a few days building homes together with the people in each community. Miguel participated in a few constructions for Teto at VNE and fell in love with the community.

Here I am, inside the center!

Mariana’s workshop was scheduled to begin at 6pm, but we arrived at around 3, giving us plenty of time to prepare and gather our participants. We quickly learned that the best form of advertising was via word-of-mouth and by interacting with people who were hanging out in front of their houses or stores. In doing this, I got a great tour of the community, by a group of young girls who had spent the early part of the afternoon drawing at the center. VNE is already complete with a community garden, playground and a small soccer field at the very top—not to mention the incredible view they have of the nature reserve in their backyard. We arrived back at the innovation center at around 5:30 to prepare the materials for the workshop. At 6, we were perfectly ready to go, but no one was there. At 6:30, still no one. We decided to all go back out and call our new friends we had made during the afternoon. Miguel, who has been going to the community every day for the past year, already knows the “regulars.” With his big friendly smile and irresistible “Fala, broder!” (translated to “what’s up, brother!”) a few kids began to fill the center. Suddenly, we had a crowd of teenagers and even a few moms excited about the flashlights.

Mariana began to explain the concept of basic circuitry to our crowd. We soon learned that our role as volunteers would be way more than just helping with logistics, but we had to put our high school physics memories to the test! The assembly kits, which were donated by Olin College of Engineering, required a level of detail that would be hard to explain in the two hours we had programmed for the workshop. With soldering irons sizzling, wires clipping, questions flying, the center was buzzing with activity. Needless to say, we lost track of time and before we knew it, several moms were arriving at the innovation center wondering where their kids were so late at night. When they arrived, the kids were excited to show them their new creations, which would also be used to guide their way home.

Of course, this was not all so easy. The assembly kits were quite complicated for an introductory workshop, and each participant demanded more attention than we could provide. Many of the flashlights didn’t work on the first try, and the younger kids grew frustrated with their failed attempts. This is where something I learned at a workshop back in May (mentioned earlier in this blog) kicked in: Failure is only when you quit. The kids knew this and wanted to keep on trying, but the hungry and tired volunteers needed to pack up. In sticking to my belief that you should’t quit something when you want it to work, and seeing how dedicated the workshop’s participants were about making the flashlights work, I offered to continue the workshop on a different day. We scheduled a time for the following week when I would return to VNE, on the condition that those who didn’t get a chance to finish would bring a friend or two to the second workshop. For this one, I would plan an even simpler circuit, and would play around with the workshop’s participants in assembling the LED connection. I didn’t know what I was in for.

LED flashlight assembly kit, created by Olin and assembled by Mariana and Marité 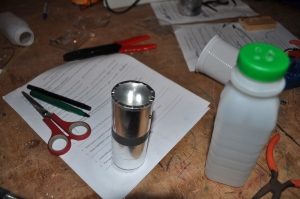 The first completed flashlight, assembled by Tempei, the innovation center’s only full-time staff

Since then I have returned to VNE about twice a week, learning so much with every visit. Right now, I am planning a new workshop which will encourage participants to draw and use visual documentation as a learning tool. Saturday is the second part of a photography workshop led by a friend of mine, and we will combine a part of her program with the drawing course. My experience at VNE so far has taught me a lot about the meaning of “innovation,” which I have been struggling to define over the past few months. An innovation is not something necessarily revolutionary or technologically advanced, but yes a new approach at an old problem. The flashlight workshop was a tool to inspire the community at VNE to use their own resources toward solutions to daily issues. Since the city doesn’t provide electricity, the streets at night are dark. With their new flashlights, the kids could have a safer walk home, and feel empowered to find resourceful solutions. Our hope is to leave a permanent stock of the tools necessary to build the flashlights, but also for those who wish to explore more electronics to play with.

Below are a few photos from the first workshop. 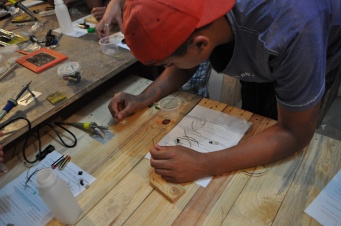