Hello from the D! 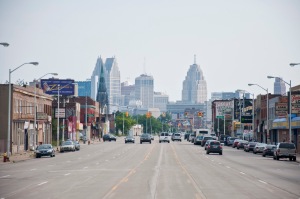 If you’re a native Michigander like me, you might affectionately call our big city, ‘the D’.  It’s one of the many nicknames for a city that has played a large role in American culture throughout the twentieth century.  Some of the other names that people across America might be more familiar with are ‘the Motor City’, ‘Motown’, ‘Detroit Rock City’, or ‘Hockeytown’.  During the middle of the twentieth century, Detroit was one of the biggest and most prosperous American cities.  Unfortunately, over the past few decades, Detroit has become a desolate post-industrial city where it is often difficult for residents and outsiders alike to uncover positive aspects of the place.  National media fuels the fire for the negative light.  Few tourists visit the city and often when they do, they are here to photograph what is sometimes called ruin porn.  It is the exploitation of abandoned city infrastructure and buildings at the expense of the city’s image.  One of the most photographed sites in the city is the old Packard plant.  The abandoned factory sits on the edge of the district in which I am working. 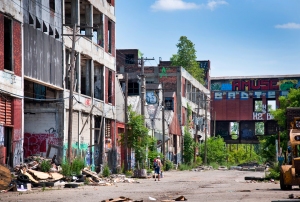 Much of the district where I am working is covered by fields where single family homes once stood.  These fields and vacant spaces are what LEAP is focused on dealing with.  How can these abandoned spaces become productive?  How can the Eastside residents be involved with the process?  How can re-designing these spaces help with water remediation?  Create jobs?  Feed people? Remove blight?  Boost Detroit’s image?   Improve the lives of residents and existing businesses?  These are all questions that LEAP has been asking.  These questions are also the reason that I am working in Detroit this summer.

One of the overarching goals of LEAP is to develop the Eastside as a green district.  I have been placed within the framework of a project that is in its initial stages of planning.  The project which is named, the Mack Avenue Green Thoroughfare [Green T], sets out to accomplish several things.  It will establish a ‘green’ corridor along Mack Ave using green infrastructure.  The Green T will improve water remediation throughout the corridor which in turn alleviates some of the impact on city storm water systems.  Pennycress fields will be planted as part of a larger biodiesel production business.  The low height of pennycress will improve visibility along the corridor because in many areas, it will be replacing overgrown lots.  Opportunities for installing public art will become available.  The neighborhood aesthetics will be greatly improved.  Neighboring homes and businesses will benefit from positive change along Mack Avenue.

The definition of green corridor and green infrastructure is open for exploration within this project.  They are new concepts for Detroit and therefore could be redefined for this city.

An initial ‘demonstration block’ will be implemented as the first phase of the Green T project.  The design and implementation process is yet to be determined. This is what I am currently helping with.  A lot of legwork has been done already within LEAP and the larger non-profit group named the Detroit Neighborhood Partnership East [DNPE]. The Green T is the initial catalyst that hopes to spark the beginning of the LEAP district’s transformation into a green district.  Within the demonstration block, there are opportunities to place public art alongside informational signage about the project.  This is a really exciting time to be involved with LEAP and the Green T because the opportunities for positive change are endless!  The demonstration block is located on the South side of Mack Ave between Lakeview St and Coplin St.

One week from now, I will be touring a facility where pennycress is processed into biodiesel.  The intent is to fully understand the process from planting the crop to consumption so that it can be explained through graphics to the public.  I’m excited to see how all of it works and meet the people involved!

For now, I’ll leave you with this shot of downtown from Belle Isle Park during a rainstorm.  The waterway is the Detroit River.